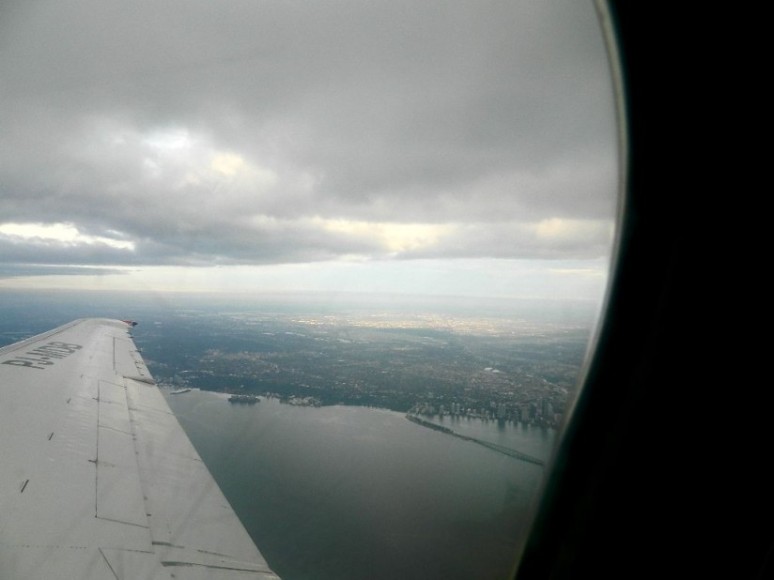 Welcome to Haiti! Here’s little tour of our first day. Wi-fi is spotty so I’m not sure how often I’ll be able to write, but for now:

We arrived at the tiny airport around 10:30 and grabbed our bags. 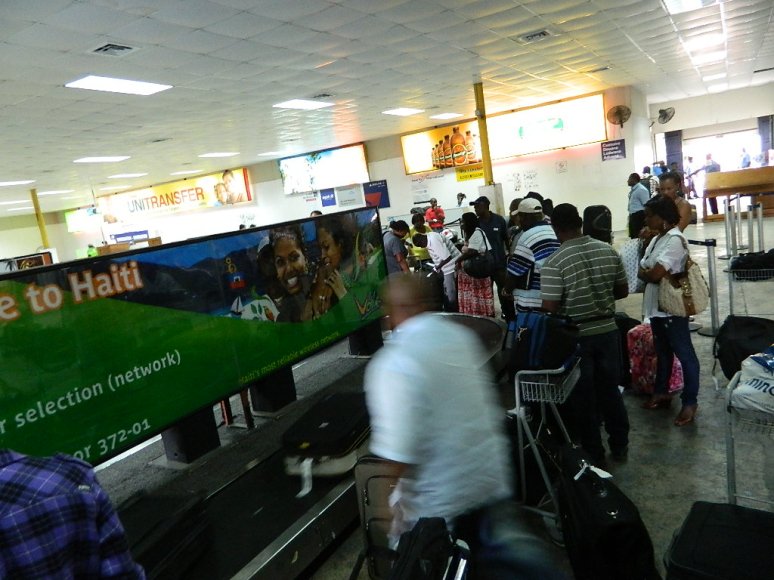 Aly met us at the airport with a car and driver, Jean-Claude, who is also Aly’s childhood friend. The five of us piled into Jean-Claude’s Mitsubishi and headed out to see some sights in PaP (estimated population of metropolitan area = 3 million, nearly half the country’s total population). Driving in Haiti is complete mayhem: no traffic laws, no signs, no speed limits, very few stop lights. First impression: people and more people stuffed into cars, motorcycles, trucks, women carrying bundles high on their heads, street vendors selling every imaginable thing, and the occasional dog or pig, all negotiating for space, all vibrating against a backdrop of high heat, humidity, diesel fumes, noise and urban detritus. Just when I was sure we were going to hit one or five people, the flow of chaos moved around us and we continued on. 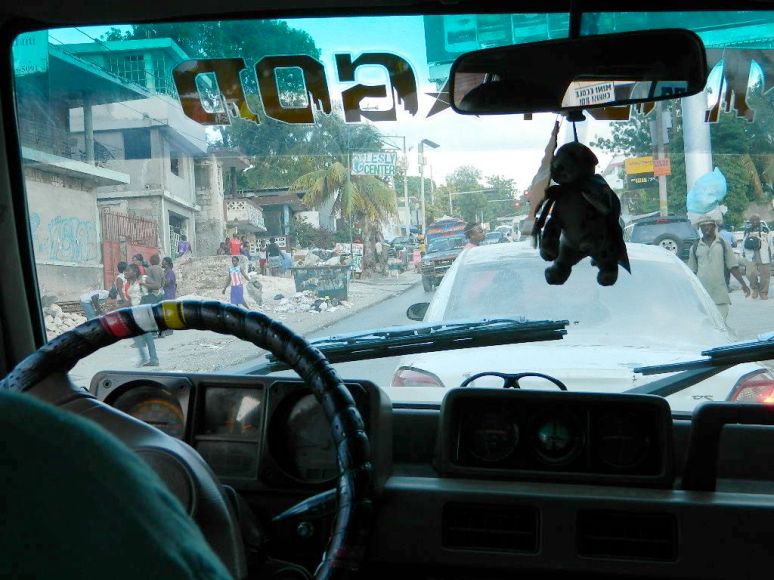 Traffic etiquette here seems to be watch where you’re going, pedestrians have the right-of-way, use your horn to communicate all things, miss the pothole (where’s the road?) don’t get smashed by the tractor, ooooo that was close. Similar, I suppose, to driving in other developing countries. But there were just so many people, so very many people.

Aly pointed out the tent cities that had sprung up in parks and public spaces after the earthquake. The biggest cathedral in PaP was totally demolished. I thought the ruins were still beautiful. 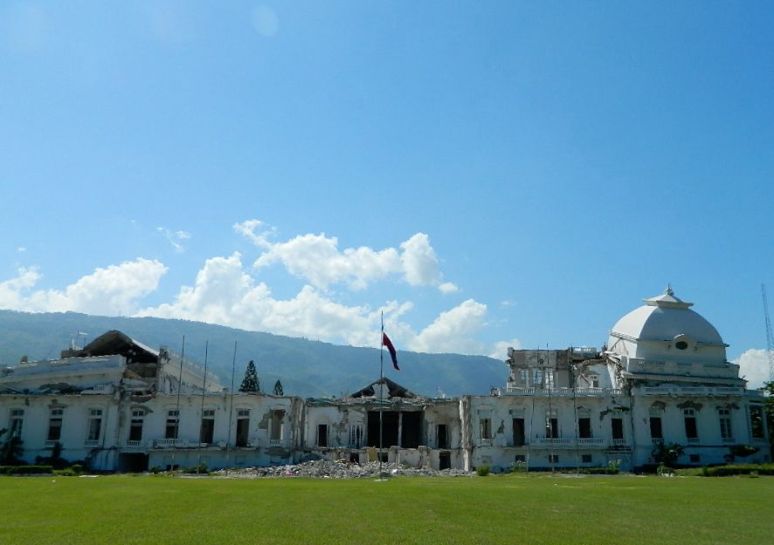 Haitian people were happy when the Presidential Palace was damaged beyond repair in the quake because it’s such a symbol to them of political corruption and abuse of power.

We stopped at the Ecole Nationale des Artes (ENARTS), a small, free school for performing and visual arts.  Students learn theater, music, painting, sculpture and dance.  Josué Blanchard was kind enough to give us a tour.

He was recently featured in this publication for the fiberglass sculpture he created of a woman peeing in a bucket, which was viewed as scandalous.  He said the subject matter is just part of life in Haiti.

ENARTS re-opened only two weeks ago after being shut down 5 years ago (plus damaged in the quake) due to instability in the government(s). 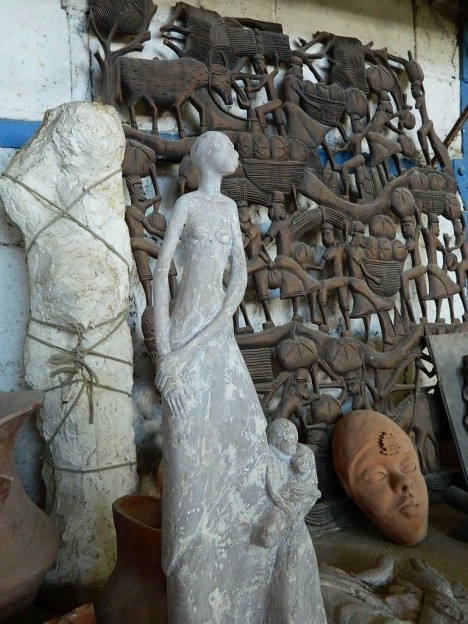 One of the most interesting things at the school was the defunct foundry. This was the very first foundry in the Caribbean and it was once used to cast bronze sculpture. 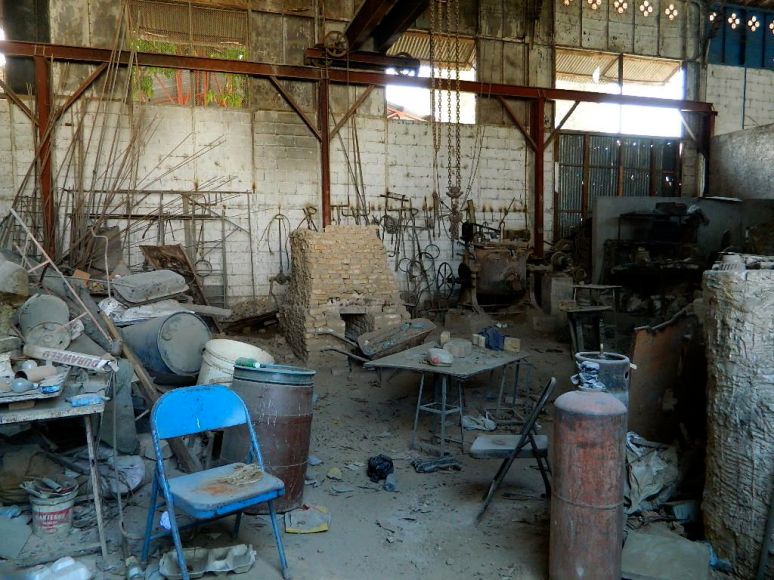 The crucible was fueled by wood and kerosene that heated boilers for the pour. (I know there’s a more eloquent way to describe that but the words are escaping me after only one rum punch. And the power just went out as I’m writing this, so it’s dark.)

I was required to dispatch this little mouse with a good stomping before Gabe would set foot into the old foundry; and even then, he refused to go much past the doorway and was ready to jump on the blue chair at any moment.

After ENARTS, we checked in at the hotel to rest and eat for a while.

The Oloffson is full of *charm* and *character*, but this did not appeal to Gabe, who complained that it was old, the beds didn’t have mosquito nets and you could see under the walls between rooms (discovered later). 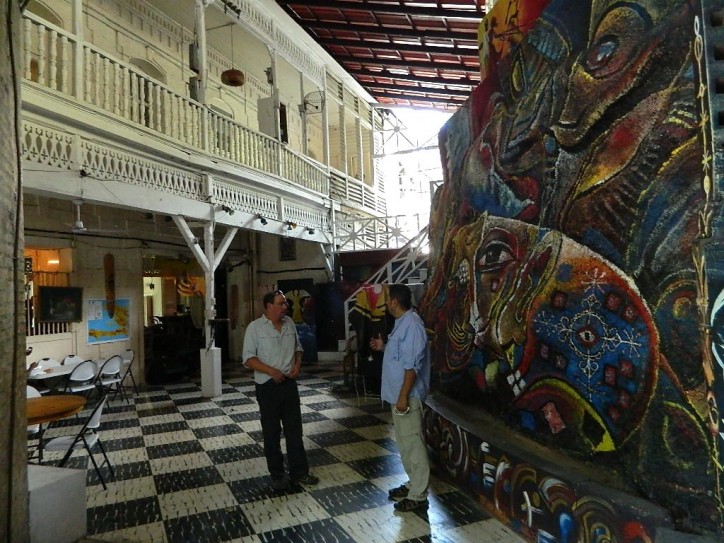 Cam and Gabe discussed the appeal of character and history vs. more modern conveniences at a hotel in Pétionville where Gabe wanted to stay, conveniences such as wi-fi in the rooms and hot water (also discovered later). Gabe was ultimately out-voted 2:1 and we checked in. Cam and I wouldn’t have dreamed of visiting PaP without staying at the famous Oloffson. 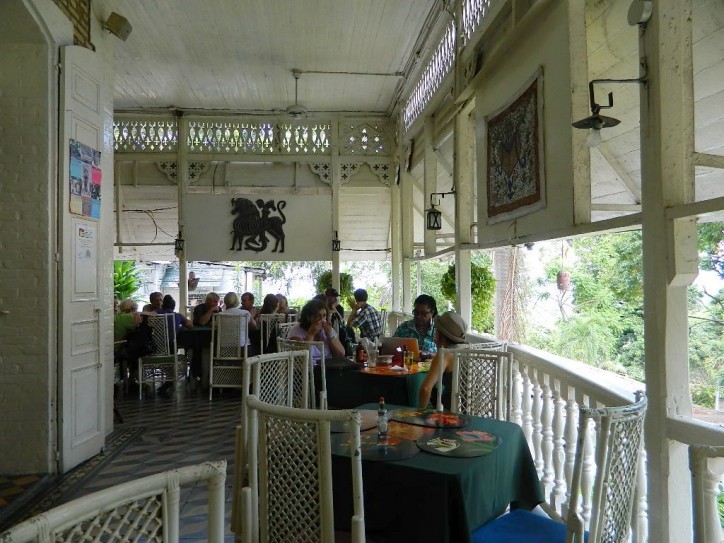 We had sandwiches on the front porch and Cam and I made plans for the rest of the afternoon. Gabe announced (4 hrs after arriving) that he would not be visiting Haiti again “because I have other places to see, like Smyrna.” He never re-traces his travel steps. I was about to argue but he broke into song, “I’ve been to paradise but I’ve never been to me” and I was stunned into silence. Unbelievably, he knew all 4 verses.

Cam enjoyed reading Amy Wilentz’s book outside of their room, named after the author. 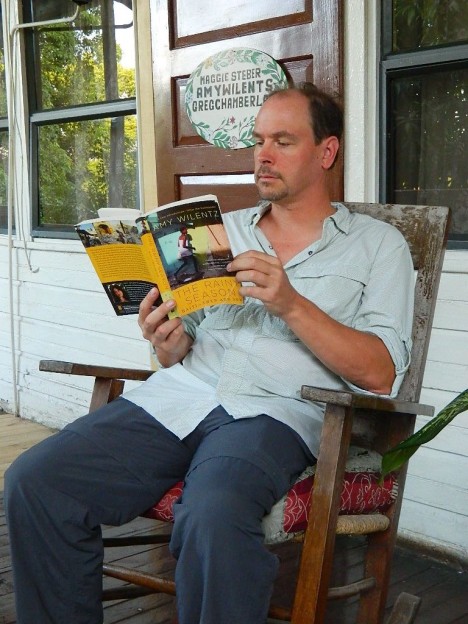 In the late afternoon we went to Pétionville, a relatively affluent suburb located in the hills east of PaP. It was named after Alexandre Sabés Pétion (1770–1818), the Haitian general and president later recognized as one of the country’s four founding fathers. It is one of the wealthiest parts of the country, where many diplomats, foreign businessmen, and a large number of wealthy citizens do business and reside. 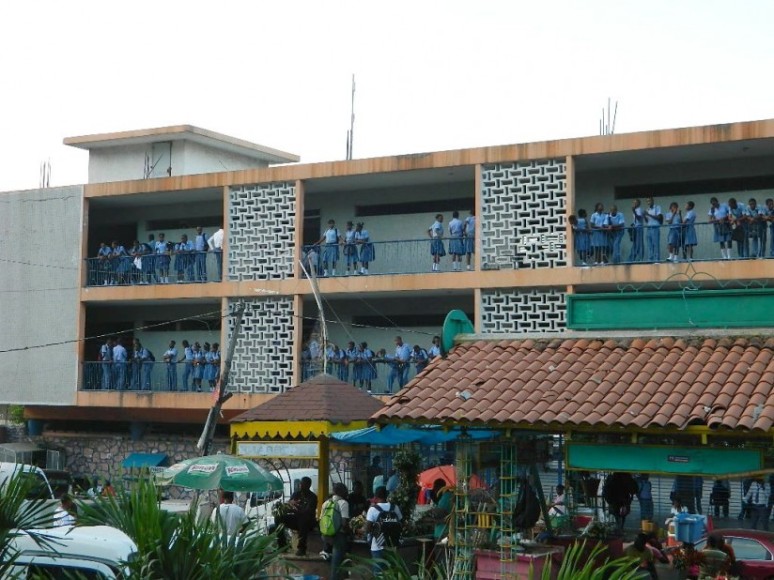 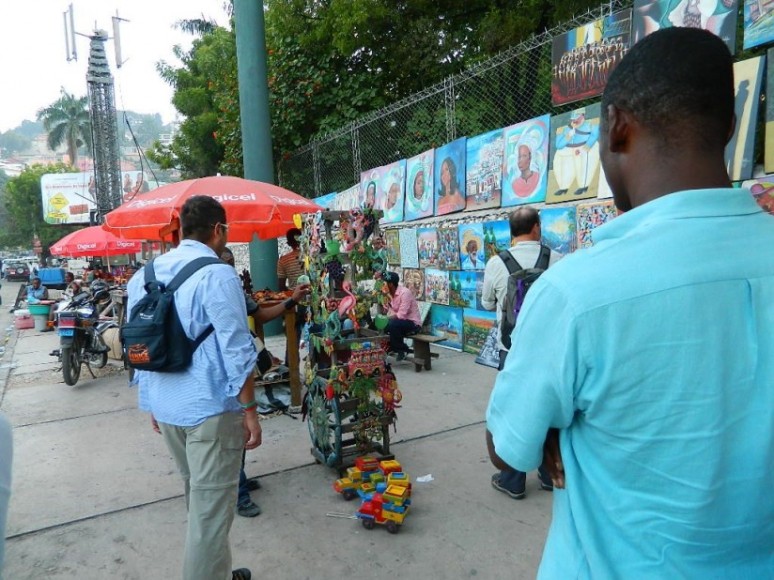 The central park in Pétionville is now a tent city. Near the park, there was a high school above a flower market and lots of people selling all kinds of art on the streets. I was shocked by how many hundreds of original paintings (not prints) covered the walls.

We ate dinner on the way home, not far from our hotel.  There are street vendors all over Haiti selling food–cooked, packaged, dried, fresh. This woman and her daughter or friend were set up across the street from our restaurant selling hot dogs. 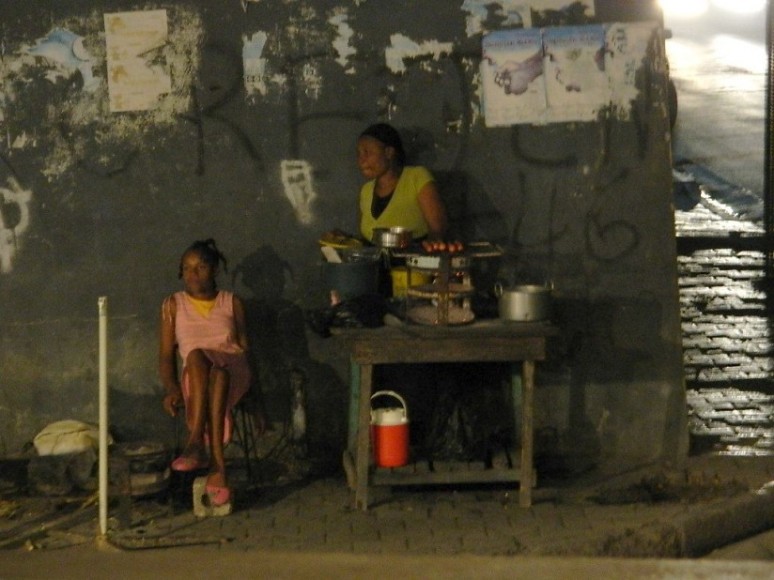 There weren’t a lot of vegetarian options among the fried goat, chicken and pork on the menu, so we had a veggie pizza for dinner while we watched various things on TV, including Haiti’s musician-President, Michel Martelly’s, music video.  And now, here I am, trying to finish this post at the end of the day in the lovely Oloffson (famous for rum punch) Lounge. Bye for now.