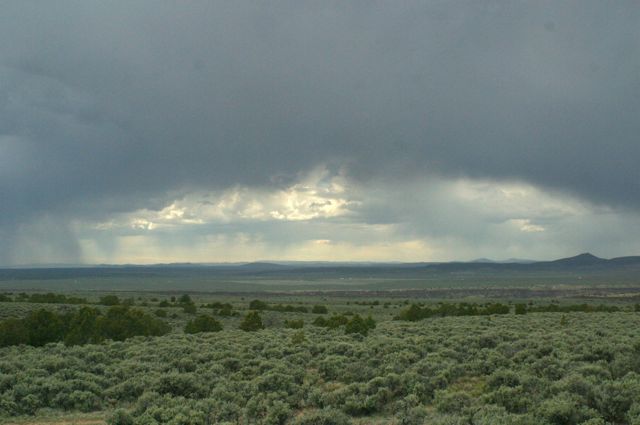 Last weekend, a friend and I made the beautiful drive from Albuquerque to Taos, New Mexico to see a Rebecca James show at the Harwood Museum and have a little fun. Taos is a special place, not because of the exotic romance associated with New Mexico or the West in general, but because of the way it (at the risk of sounding like a crystal cruncher)… feels…. From somewhere within the complex tapestry that is Taos — the rich history of Hispanic and Native American cultures, historical architecture, amazing Taos Mountain, Rio Hondo & Rio Grande rivers, wild places and pueblos — there’s a sense of light and presence and palpable residue from the artists, writers, Natives, farmers, Hippies, ranchers and counter-culturists who have visited and called Taos home for hundreds of years. It’s laid back and small town, rural and centered around the land and particular energy of northern New Mexico. Here, I’ll stop trying to describe with words what is best experienced; for me, Taos is a thing of the heart, a thing that feels honest and like home. 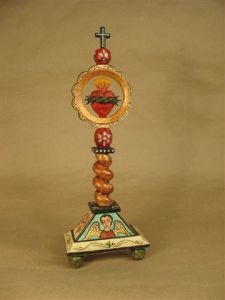 Incidentally, I recently learned that the heart, with its 40,000 neurons, is now considered to be the “fifth brain”. It is connected to the brain neurologically, biochemically, and biophysically.  There is now solid scientific evicence of what poets, mystics, and ancient traditions of every culture have always asserted: the heart, not the brain, is the center of our being; it is capable of “knowing” on an emotional and intuitive level of its own. (It’s no wonder that hearts of all manner — flaming, stabbed, thorn-covered and weeping — have always been such prominent symbols in the Santero carvings and folk art of New Mexico.) How exciting is that?!

I’ll leave the heart research to you; for now, here is a slide show of images of Taos & Arroyo Seco, followed by a info on Arroyo Seco. I’ll let the images speak for themselves, except to say that they include the perfectly unglamorous El Pueblo Lodge (read the full liveclay review here), The Harwood Museum, Taos Inn (oldest bar in town), Weaving Southwest, Michael’s Kitchen, World Cup Coffee (my new favorite coffee place, just off the plaza), Taos Cow (great outdoor seating by the creek), Rottenstone Pottery, one super-secret waterfall, and, of course The Landscape.

Arroyo Seco (Spanish for dry creek, or wash) is 15 minutes north of Taos on SR 150. This area of northern New Mexico is home to an amazing number of clay artists, potteries, and a variety of outdoor kilns, including wood and soda. 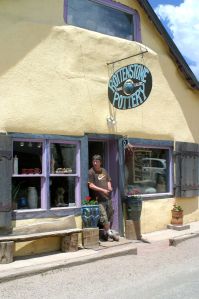 My favorite clay gallery in Arroyo Seco is Rottenstone Pottery, run by Scott Rutherford. It’s right on the main street, across from Taos Cow ice cream and deli, and Abe’s Cantina & Grocery. (So, within that fortuitous little triangle is perhaps everything a visitor to Arroyo Seco might need.)

Scott makes beautiful work in the Japanese oribe style, as well as really cool boats, both historical and imagined, that are also functional. For example, the Tequila Tug, Japanese Freighter Sushi Service, USS Texas Barbeque Battleship or the USS Intrepid Hors d’oeurves Carrier are beautiful sculptures that can also be put to use at a dinner party. 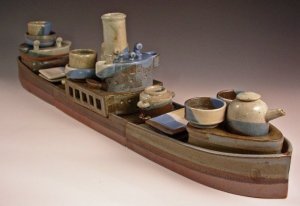 Rottenstone is packed with gorgeous woodfired pottery by Scott, John Bradford, and others, ranging from the smallest tea bowl to large sculptures and paintings. Scott hasn’t yet assembled a web site for Rottenstone, so it’s best to find the particulars of hours and inventory on his Facebook page. 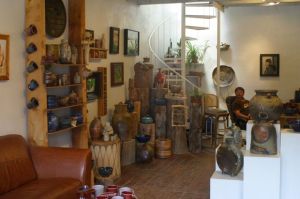 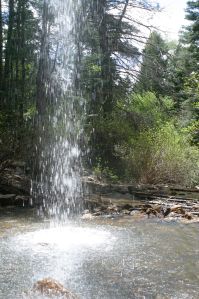 Always the gracious tour guide, Scott also pointed us in the direction of an amazing series of small waterfalls at a nearby, undisclosed location. If you’re in the area and want to see them you’ll have to visit Scott and ask for directions, which he may or may not give. (Perhaps buying a lovely piece of pottery will tip the scales in your direction.)

Hope you have enjoyed this little tour into a special place, known best, like most things, with the heart.