Please excuse the long absence. I lost Diego three days after my last post and haven’t felt much like writing. But I’ve kept busy with studio work which was helpful, and slowly, things are getting better. I’ll post pictures of new work tomorrow or the next day.

These mourning doves showed up in front of my studio a few days after Diego died, keeping me company for a few weeks as the baby grew up. The three of them, mother, baby & nest, were apparently blown out of a tree one stormy afternoon. I came home to find the mother sitting on her chick on the ground. I thought it was too dangerous for them to stay there, so I nailed a plastic container to a branch in the tree and put the nest and chick in it. I was afraid the mother wouldn’t come back, but she did. The tupperware-enhanced nest proved quite sturdy and they were there every day keeping watch over the driveway. Once the baby fledged, it hung out on the studio porch and in the back yard for a while learning to fly.

I read a bit about mourning doves while they were here. It turns out they’re the closest genetic relatives to the Passenger Pigeon**, which once numbered in the billions in North America until they were hunted to extinction in the early 20th century. 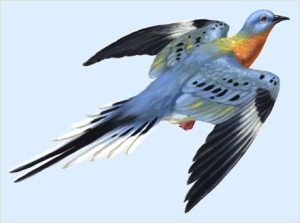 The flocks were commonly 300 miles long and 1 mile across, if you can imagine that. According to the Wikipedia contributors, the real decline occurred when pigeon meat was commercialized as a cheap food for slaves and the poor in the 19th century, resulting in massive hunting. Before poultry farms, there were passenger pigeons. They were netted in trees and hunted with shot guns, whose pellet sprays could bring down dozens at a time. When it became clear in 1850 that their numbers were diminishing,  frenzied hunters went out and killed even more.  Subsequent attempts to establish captive flocks failed because it was discovered too late that they were very gregarious birds who practiced communal nesting and breeding. Only very large flocks with very large breeding grounds were sustainable.   The last known passenger pigeon died in the Cincinnati Zoo in 1914.

Mourning doves are also hunted, but amazingly resilient. It’s estimated that 40-60 million are shot by hunters every year, yet their numbers remain consistent (around 475 million). They can have up to 6 broods each season with one or two eggs per brood. The possibility of using mourning doves to clone extinct passenger pigeons has even been discussed. Weird.

**update: Thank you Jason for the link to this Science Daily article describing how the mourning dove is not, in fact, the closest genetic relative to the passenger pigeon. As it turns out, other North and South American pigeons are more closely related (as published Oct. 2010 in Molecular Phylogenetics and Evolution). Interesting article with lots of passenger pigeon info & more sciencey stuff about mynotypic genuses, phylogenetics and other things that tend to make me want to eat chocolate.