Greetings  from Turkey!  I’m in Istanbul right now as a member of a journalism delegation sponsored by the  Turquoise Council, a Turkish organization that strives to promote Turkish-American relations through dialogue and understanding.  If you’re thinking, “I didn’t know you were a journalist!”, well, you’re right,  I’m not.  I’m here as more of an accessor- observer type who will document what I can along the way with a few words and pictures so I can at least share a little of this amazing country with my vast readership. Thanks for coming along for the ride.

As you can imagine, the amount of  visual, historical, and political  info I’vre already been exposed to is overwhelming.  Too much to write here, but I’ll share a few thoughts on this second day:

Turkey is a really interesting place.  This is the first time I’ve traveled in as Muslim country (the predominant religion, although Turkey is officially secular and all religions are accepted).   Unlike many of its neighbors, there is currently no political strife or social unrest.  The Parlimentary elections are coming up in a month, and of the 15 different parties that will be represented, the one in power now, JDP (Justice and Development Party) is expected to win for the third time in a row — very unusual.  The popularity of this party is attributed to a foreign minister who has fostered much-improved relations with bordering countries;  and a very strong economy. ( Turkey has the third fastest growing economy in the world in 2001, right after China and Brazil, and was #2 in 2010.)

Like many of its European neighbors, the history of Turkey is a fascinating look into the nature of empire, power, religion, and social structure.   It has been under the control of four different empires since ancient times:  the Latins, Romans, Byzantine, and Ottoman.  The last of these, the Ottoman Empire, ended in 1923 when the Turkish Republic was created under  Ataturk.  I’m no history buff, and knew very little about Turkey before coming here,  but I’ll share a little of what I’ve learned whenever possible.

These first two days in Istanbul, we’ve seen many of the major sites: Topkapi Palace, Chora Museum, Dolmabace. I won’t go into the spectacularness of these places because the guide books do a great job of that.  But a few of my own impressions so far:

And now, in the interest of not trapping you in ‘someone else’s vacation pictures’ hell, I’ll just post a few of my favorites from these first few days, with brief descriptions:

The Chora Museum, formerly a monastery & church. Was briefly a mosque when the Byzantine Christians abandoned it in 1543 for fear they would be persecuted after the Ottoman’s took Constantinople.  Some of the finest examples of frescoes and mosaics anywhere. It’s hard to tell from the photos, but the mosaic pieces are maybe 1/4″ in length (and shorter). Image at the age at the top of the post is a detail from the hands of Mary. 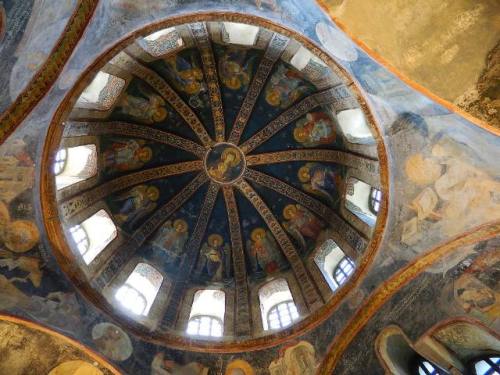 Chora cats have evolved to blend in with the stonework.

Dolmabace, the “new” palace built over 13 yrs during the mid-19th c. to rival European palaces, utilizing European architectural styles.  My opinion, the old palace (Topkapi) was much nicer, with its distinctly Eastern architecture and decoration. But imagine the impression visiting dignitaries would’ve had upon stepping off of their yachts, having sailed up the Bosphorus that flows between the Asian and European sides of Istanbul, and seeing this thing.

Taksim Square, one of the most crowded shopping districts in Istanbul (can yu tell?). Unlike the streets of NY or New Orleans or LA, these were very clean and the crowd, although dense, were not angry and pushy.

Many of the Turkish desserts  involve semolina, a thin wheat noodle similar to angel hair pasta, but much finer. This dessert was like baklava on the inside and this semolina on the outside, being drizzled with honey (I think).