Fortunately for me, our journalism delagation tour here in Turkey also includes a look at art history & traditions.  So naturally, a visit to a rug shop was in order. Our friend and delegation leader, Resul, arranged for us to meet with Tayfun Kaya, owner of Caravanserail Carpets and Jewelry in the city of Kusadasi, and his assistant, Mustafa. Mr. Kaya and Mustafa have been in the carpet business their entire lives, same as their fathers and grandfathers before them, and work seven days a week.  After this educational tour, I now understand how my mother returned from Turkey last year with not one, but three gorgeous rugs, and only a vague notion of how it happened.

Our meeting began with Turkish coffee, baklava, and a brief demo & explanation of the long tradition of carpet making in this region. The silk industry purportedly came to Turkey in the 12th century when Byzantine monks smuggled silk worms back from China. These days, Turkey is the second largest silk producer in the world, right after China.

Silk is the second strongest naturally-occurring fiber, with spider web being the first.  Each cocoon spun by a silk worm is a single strand, approximately one and a half miles long (!).  To harvest the silk, the cocoons are boiled with the worm inside; if the worm were taken out first, the strand would be broken.

A broom is used to grab the fibers after the cocoons are boiled. Thirty-five fibers are spun together to create one silk strand. 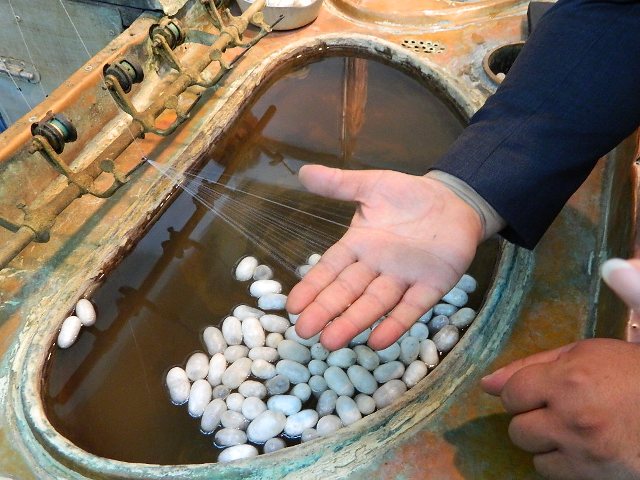 Turkey considers their silk to be superior to China’s because they grow only white worms that eat only mulberry leaves, while the Chinese grow a large proportion of yellow worms that consume the entire mulberry tree (less expensive to grow). Most of the silk worms in Turkey are grown in the Bursa region, not far from Istanbul. 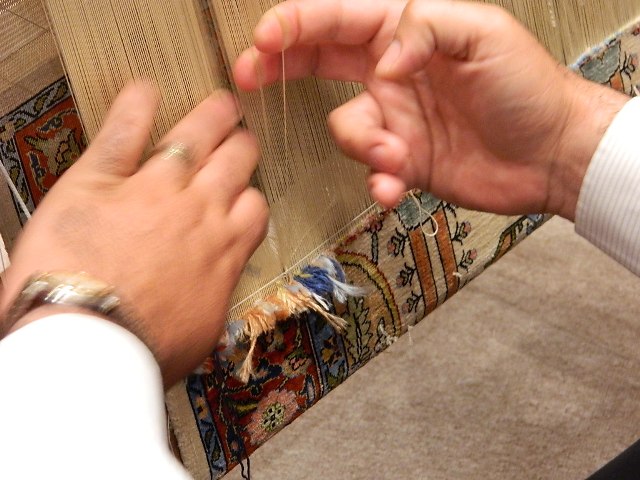 Turkish carpets are composed of various warp/weft combinations:  wool/wool;  cotton/wool;  cotton/silk; or silk/silk.  The rugs are hand-woven on looms by women using the double knot technique.  Following the pattern, colored threads are looped around two weft strands in sort of a pretzel pattern, and tied tightly.  Then the threads are combed down and trimmed.

Turkish rugs are priced according to the number of knots per-square-inch only (not size), because obviously, the higher the knot count, the more time and expertise that has been invested. Knots per-square-inch range from 24 (very rough) to over 4,000.  The finest designs can be created only in silk, with anywhere from 450-4,000 knots psi. The knots are the main difference between handmade and machine-made rugs, the latter of which uses glue to adhere fibers to the warp.  Glued fibers eventually rub off, while knots become stronger with use. The average lifespan of a handmade Turkish rug is 100-200 years or more, depending on the quality. 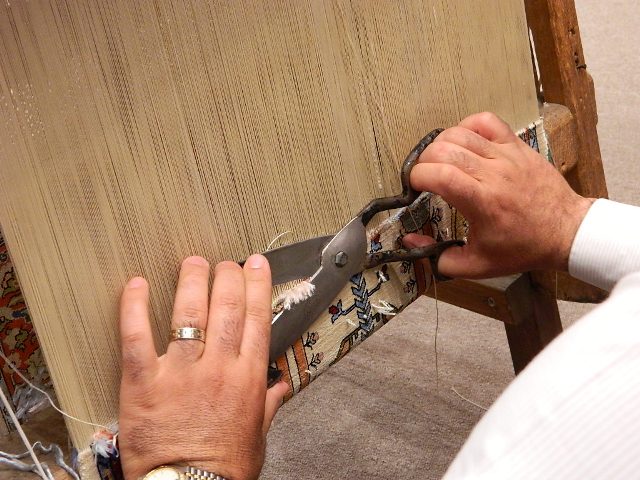 The Guiness World Record holder handmade rug was woven by a renowned carpet making family in Anatolia with a stunning  5,000 knots psi.  Tayfun explained that the rug was purchased by a Japanese buyer, but Turkey later regretted the sale and felt it should be kept here as a national treasure.   A representative from Turkey flew to Japan and offered the buyer twice what he had paid, but the man refused to sell.  There is now a rug under construction by the same family with 5081 knots psi so that Turkey will once again possess the world’s finest handmade rug.

After the demo, which began with, “This is not time to buy rugs, only to learn,” I decided to photograph some of the beautiful examples on the floor.  Next thing I knew, [to be continued…]