Isabella and the Heart Palpitations 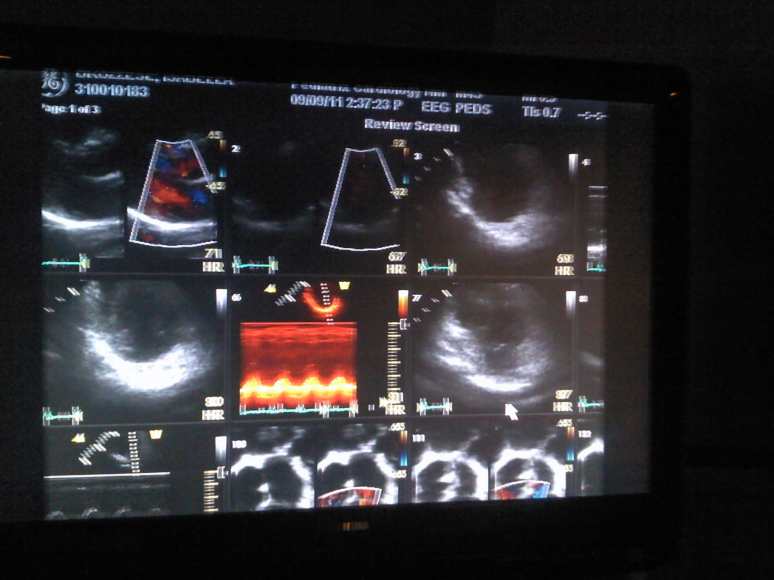 Being the mother of a teenaged daughter is not easy.  Being the mother of a teenaged daughter born with a penchant for drama, whose life is a dramatic interpretation of reality itself, deserves a special perch among the martyrs of the world. I’ve been blessed with the good fortune of an extremely healthy child; colds and flus are rare, and with the exception of a broken arm at 18 months old, Isabella has had no medical mishaps or trips to the ER.  In fact, so rare have illnesses been that the stomach flu was an unknown until Isabella was in first grade.  I remember it very clearly: after spending most of the night with a high fever and vomiting, she asked me in the morning if I might pick her up a little early from school that day on account of the stomach flu.  It was then that I realized the capacity for self-pity is learned.

Sadly, those days are gone, those innocent days of suffering without judgement, labeling, analysis, or demand for comfort because one is entitled to a safe and painless life.

Lately, for the past 6 months or so, Isabella has been complaining of occasional rapid heart beats, chest pressure, and random, shooting chest pain that she supposed emanated directly from her heart.  She normally walks slightly hunched, with her long, slim arms folded at the bottom of her ribs.  While this could be described as normal teenaged droop, it drives me nuts.  One of the many times I returned her to the vertical (she finds this so annoying),  she offered, “I can’t help it!” claiming that this particular arrangement of her limbs was an involuntary attempt to protect her heart (symbolic if not actual) which she believed was possibly gravely ill. God.

Because the complaints of rapid heartbeat seemed to be on the rise, I took her to the pediatrician. The pediatrician listened to the symptoms that Isabella articulated in extravagant detail and with appropriate facial gestures. For example, a wince at the mention of pain or a roll of the eyes when she described a fluttery episode at a school dance and the doctor suggested it was perhaps anxiety-related. After careful consideration, the doctor thought Isabella could possibly have Supraventricular Tachycardia (SVT), basically a short circuit in the heart’s electrical system that causes it to repeatedly beat rather than complete a cycle.  A referral to the pediatric cardiologist was issued.

The day before the cardio appointment, I noticed Isabella’s Facebook status:  FOR SALE: 1 heart. Bad condition, may have Supraventricular Tachycardia.

The appointment was yesterday afternoon. After considering previous medical experiences with my daughter over the past 13 years, including fainting after a shot and squealing in a lab corner when a PA tried to draw blood for an anemia test, I decided to make a preemptive strike. Hoping to thwart gloom and drama at the cardiologist’s, I presented her with pumpkin bread and a chai latte when I picked her up from school.

Seemed to work at first, until she burst into tears after my brother called on the way to the appointment to let us know that his wife, who had just undergone surgery, was doing well. Naturally, I assumed Isabella’s reaction was related to the phone call, but I had no way of knowing for sure because my questions were met only with angry, sullen, streaky tears.  Later, Isabella clarified that she was just crying because she really didn’t want to know about her heart, dour as the news was sure to be. God. 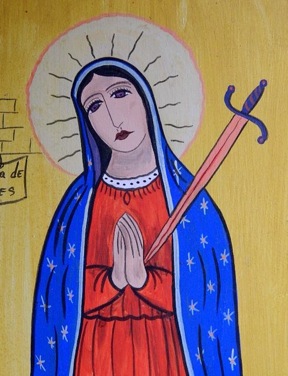 I attempted to promote a cheery optimism by inventing a song about irregular heart beats and cardiac arrest that I sang aloud all through the hospital corridors as we searched for the right elevator system to whisk us to the appointment. But strangely, this did not lighten Isabella’s mood.  In fact, she stormed several feet ahead of me, flat-ironed hair whipping behind her, for the remainder of our hospital journey. By the time we arrived at the correct office, her face was swollen and as red as her Holy Ghost Catholic School t-shirt, and I was hoarse.

We were escorted to an exam room by a girl who appeared to be 17 but was really 32. She took weight, height, blood pressure, and then started sticking things to Isabella’s body as she lay down. The MA stopped abruptly when she saw tears trickling down Isabella’s face, falling in sad drops onto the vinyl exam table. At that point, the MA realized she should perhaps let Isabella know what the stickers were for: to attach EKG monitors, not administer subcutaneous poison or electrical shock treatment. Whew, what a relief!

Next, the doctor: a very nice doctor who thankfully had two teenaged daughters of his own.  He spent lots of time reviewing the EKG (normal) and asking about symptoms. Again, Isabella described her heart sensations with accuracy, flair, illustrative detail that would make her English teacher proud.  The doctor actually congratulated her for the eloquent and well-spoken responses which he would have expected from someone 16, not 13.

After discussing his assessment and options for further exploration of the symptoms, we decided on the best course of treatment.  First, Isabella would have an ultrasound to rule out a faulty valve; next, we would take home a small monitor to be worn for a month, a button pressed for every episode. Great! Off to the ultrasound room we went. 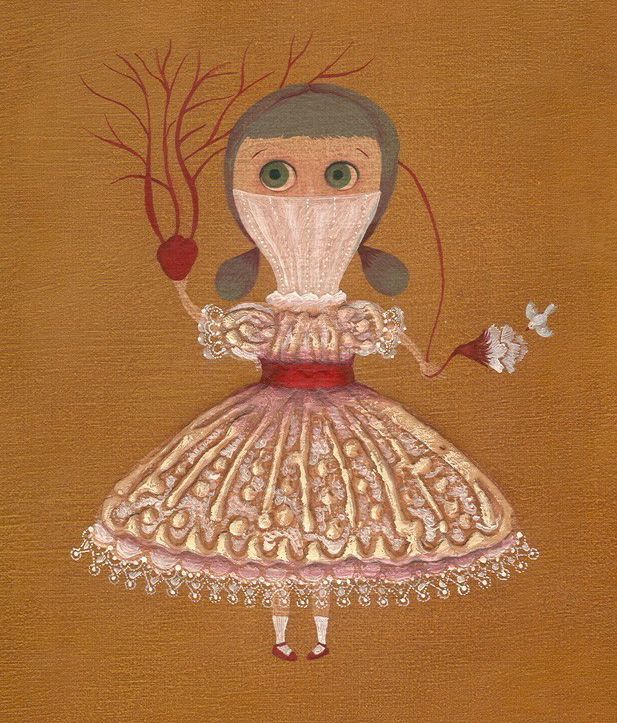 Heart Inspection by Elsa Mora. Visit her beautiful Etsy shop by clicking on the image.

Anyone who’s had an ultrasound knows they are usually simple, painless, and kinda fun, right?  I had no reason to anticipate complications here. So, simple, right? God.

Granted, it didn’t help that the radio tech didn’t tell Isabella what, exactly, she was doing, why, or how she could help make it a successful experience. She just started whisking around with the ultrasound wand telling Isabella to stop breathing so deeply because her lungs were in the way, and turn over this way no that way and don’t be scared, wait, lift your knees ok I think we got it but stop breathing now what’s wrong honey why are you crying? Don’t be scared!

My capacity for drama already saturated for the day, I sat in the darkened room mesmerized by the videos of Isabella’s heart from all angles, whoosh whoosh whoosh the last time I’d seen her heart on a monitor, it was just a cluster of cells already beating in unison. Whoosh whoosh whoosh, the ocean, drums, Ohm.

By the time I regained consciousness, the ultrasound was done, the tech disappeared, and Isabella was long into the description of how traumatic the procedure had actually been. Pain, pressure, humiliation, partial nudity. One more thing for the kids at school to gawk at, 6th degree of separation from normal! God. I considered another rousing chorus of “No One Loves A Deadbeat” but just didn’t have the energy.

The doctor came in and looked at the heart movies on three different monitors. He saw only healthy valves, flow, pumping, all things cardiac.  As these reassuring declarations of normal heart issued forth, I looked across the room and saw Isabella visibly brighten, an apparition of the Grim Reaper floating reluctantly out of a hole in the middle of her forehead … until next time, sucka!

And so, here we are on a blustery September day with a heart declared Normal–but a monitor on the way, one last attempt to discern the symptoms.  The doctor said one possible explanation is Isabella’s very structure: tall, slim, long. It could be that she feels her heart more intensely than the rest of us, experiences anomalies that we all have but aren’t aware of.  I like that idea and yet it makes me sad thinking of the aches and pains that await her in adolescence and beyond, extra deep, fast, jumpy and unstoppable.

Meanwhile, Isabella has written a long Facebook status post with details of the exam that includes,“So whoever goes to my school and sees me walking around with a small electric box attached to my hip with wires that go under my shirt…” just in case her condition should go unnoticed.

Enjoy The Organ Donor’s March by Kim Boekbinder, which I thought a marvelous soundtrack for this post.

8 thoughts on “Isabella and the Heart Palpitations”