Haiti – on the way

I’m in Miami staying overnight with some friends of my two traveling buddies, Gabe and Cam. Our flight to Haiti leaves Miami at 8:30 tomorrow morning.

I thought I ‘d take a minute before I go to bed to tell you a little about my traveling companions and the hotel where we’ll be staying in Port-au-Prince because it has a really interesting history.  First, Gabe and Cam:

Cameron on the way to prom.

I feel pretty confident that my various organs will be in good hands with Cameron.  Plus, he’s been to Haiti before and speaks French so technically he could be a tour guide.

Gabe is an Engineer-Lawyer-MBA, who I suspect will be fairly useless in Haiti despite his considerable academic achievements. I base my conclusion on the following assessment:

1. Is Gabe a hypochondriac?
Yes.

2. If Gabe walked into a room full of power tools, what would he do?
Ask me what they are.

3.  If someone tried to abduct me, what would Gabe do?
Run.

4.  If a mouse ran across the floor, what would Gabe do?
Jump on a chair and scream like a girl.*

5.  If Gabe caught a mouse in a live-trap, what would he do?
Call me to come and take it away.* 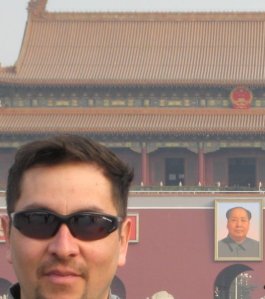 Gabe’s head. The rest of him was carried away by a large rodent.

But he is my friend and I love him despite his obvious shortcomings.  Plus he’s a guy, he’s tall, and he can probably advise me on how best to carry heavy things.
*actual events

The hotel was constructed in the late 19th century as a private home for the Sam family.  The head of a prestigious and influential family in Port-au-Prince, Tirésias Simon-Sam was president of Haiti from 1896 to 1902. The mansion was built by Tirésias’s son, Jean Vilbrun Guillaume Sam. The Sams lived in the mansion until 1915, when Guillaume himself was selected from among a group of powerful politicians to assume the post of president, the fifth president in five years. Guillaume would be president for a scant five months, however, before being torn to pieces by an angry mob.

United States President Woodrow Wilson, concerned that the Haitian government might be seized by Rosalvo Bobo (who was thought to be sympathetic to the Germans) ordered the United States Marine Corps to seize Port-au-Prince. The occupation would eventually extend to the entire nation of Haiti. The Sam Mansion was used as a US military hospital for the duration of the 15-year occupation.

In 1935, when the Occupation ended, the mansion was leased to Walter Gustav Oloffson, a Swedish sea captain from Germany, who converted the property into a hotel with his wife Margot and two sons, Olaf and Egon. In the 1950s, Roger Coster, a French photographer, assumed the lease on the hotel and ran it with his Haitian wife, Laura. The hotel came to be known as the “Greenwich Village of the Tropics”, attracting actors, writers, and artists. Some of the suites in the hotel were named after the artists and writers who frequented the hotel, including Graham Greene, James Jones, Charles Addams, and Sir John Gielgud.

A Connecticut native, Al Seitz, acquired the hotel lease in 1960. During the 1970s and early 1980s, the hotel enjoyed a brief period of fame and good fortune. Celebrities such as Jackie Onassis and Mick Jagger were regular guests, and like Coster before him, Seitz named favorite rooms at the hotel after the celebrity guests. After Al Seitz died in 1982, his widow continued to operate it. As the grip of Duvalierism closed over the country, however, the foreign tourist trade dried up. The hotel survived by serving as the desired residence for foreign reporters and foreign aid workers who needed secure lodging in the center of town.

In 1987, with the help of his half-brother Jean Max Sam, Richard A. Morse signed a 15 year lease to manage the Hotel Oloffson, then in near ruins after the final years of Duvalierism. In restoring the hotel business, Morse hired a local folkloric dance troupe and slowly converted it into a band. Richard Morse would become the songwriter and lead male vocalist and the name of band, RAM, comes from his initials. Throughout the political upheaval of Haiti in the 1990s, RAM’s regular Thursday evening performance at the hotel became one of the few regular social events in Port-au-Prince in which individuals of various political positions and allegiances could congregate.