There is so much to say about Jacmel that I think I’ll split this into two posts, getting to Jacmel and being in Jacmel. But before I can start with any of that–

Believe me when I tell you there is nothing quite so disturbing as getting up early after a poor night’s sleep, turning on a shower that you’re really looking forward to because you’re covered in yesterday’s grime, discovering there’s no hot water, and, as you curse softly to yourself under the freezing stream… a man’s voice replies from the shower in the next room.

It is particularly disturbing when the man’s whispery voice is filled with self-congratulatory gloat because he didn’t want to stay in this hotel in the first place. You’d think the newspapers stuffed in the cracks in the wall would’ve provided more privacy.

We will be moving to the Kinam in Pétionville after our overnight to Jacmel.

Boarding A Bus In Port-au-Prince

Imagined  We arrive at a small station, buy tickets, and wait to get on a bus that resembles a Greyhound (but perhaps smaller and older). Hope we don’t have to wait too long between scheduled departures.  We each take a seat, having placed our belongings in the luggage compartment, and enjoy the air-conditioned ride to Jacmel.

Real  The “buses” are “vans” that arrive at random times to the teeming marketplace in downtown PaP. We sit in the Mitsubishi until the next van-bus gets close, and then Aly tells us to go. And hurry!

The front door of the van-bus is swarmed with people pushing to get seats, not unlike fans rushing a concert stage, and I am trapped. As I am not aggressive by nature, and sort of stunned thanks to being smacked in the face by Gabe’s backpack as he boarded (he says it was an accident), Jean-Claude advances me in the right direction. I am on the bus. People are yelling in Creole, pushing and shoving and trying to sell me things, I am hunched and hovering over a man and his box in the front seat.  He’s in the middle of the seat, his box is in the seat by the window and will not move himself or his box.  I am suddenly too big for the space, a great white insect with extra appendages, long and unwieldy, bottle-necked, unable to move forward or back.

After much waving and indecipherable yelling, I come to understand that I should sit in the window seat on the other side of the man in the middle, a 10″ x 10″ square that I’m pretty sure my butt outgrew 25 years ago. Still unable to move, I decide that tossing my bags to the floor in front of my prospective seat might propel me forward and into it by some method of physics — like a fishing weight gracefully pulling a lure into the water.

This does not happen.

I am still stuck and I’m certain that the van-bus has shrunk, I’ve swelled, the air has been sucked out of it so the air-sellers can sell me more. No one else can board until I move. Lots of yelling. Finally out of options, I sit on the man in the middle, the great white sweaty insect has landed.  He wriggles with considerable effort out from under me, moves his box, and I finally take my seat near the window. Cameron drops in beside me. I have never been so happy to see him.

Eighteen of us are wedged firmly in place, Gabe and Aly in the back, Cam and I in the front.  We sit in the heat and humidity and our own trickling sweat for another 20 minutes while the 19th seat is negotiated, street vendors push things in through the windows, food, soda, water, sunglasses.  A final seat is added at the end of our row, the 19th passenger sits down, the blessed A/C comes on, and thank-you-Jesus we move.

Once out of PaP, the road to Jacmel is long and winding through the beautiful, but deforested mountains. 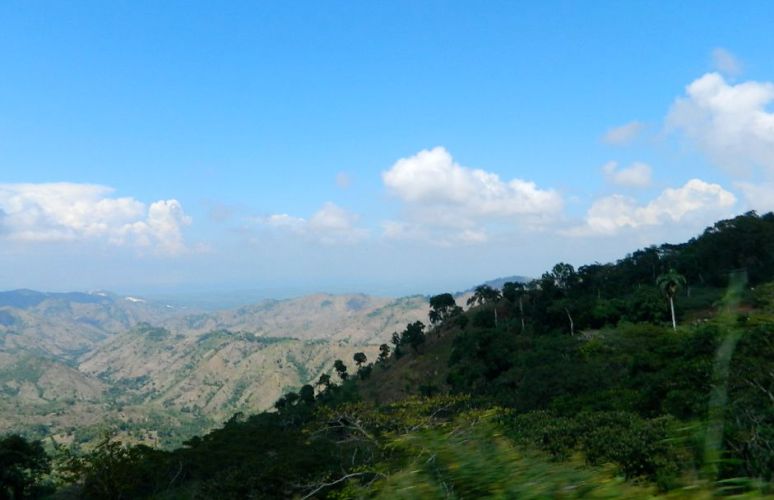 The main reason for deforestation in Haiti is that trees are the only source of fuel. Trees are cut down and brought to large fire pits where they’re converted into charcoal. It takes about 50 trees to make one of these bags of charcoal.

There are no speed limits on the road to Jacmel. Rather, every so often at a village there are enormous, undercarriage-devouring speed hills (unpainted and therefore invisible until you are upon them). This is where an experienced driver is a must.

Two-and-a-half hours later we arrive in Jacmel, get off the bus, and quickly (before I have time to panic) jump onto four moto-taxis that take us to the beach. Now we’re off to see some traditional art.