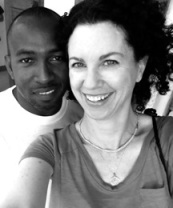 This is part 1 of the last, and perhaps most important, post about my recent travels in Haiti.  You can catch up starting here if you missed the previous adventures.

For those who don’t know about the  partnership I’ve formed over the past two years with Aly Abraham, a small-businessman and art designer in Port-au-Prince, you can read more about it on our web site here.  Our partnership, Paper Turtle, grew from my initial contact with Aly in 2009, shortly before the earthquake, when I found him online and commissioned him to create a papier-mache version of my clay turtles.  What began as a one-time job has grown into a trans-Caribbean partnership, small business, and “friends for life,” as Aly contrived.

I met Aly in person for the first time this past August, when he was able to travel to the US and join me in New Mexico for a few days. My trip to Haiti in October was the first time I’d been to his country to see where he lives and meet the artisans who work so hard to create the beautiful sculptures we sell.

Before the earthquake, Aly had a workshop where everything was done under one roof:  metal sculpture, painting, papier-mache.  But the building was damaged in the quake and all of the sections had to be dispersed.  Since the focus of Paper Turtle is papier-mache, we visited Barthold, the master sculptor who works with Aly designing, sculpting and making molds.  Barthold attended the Ecole Nationale des Artes (ENARTS), where we visited on our first day. He enjoys his work very much and is the talent who brings our designs to life, as well as his own wonderful creations. 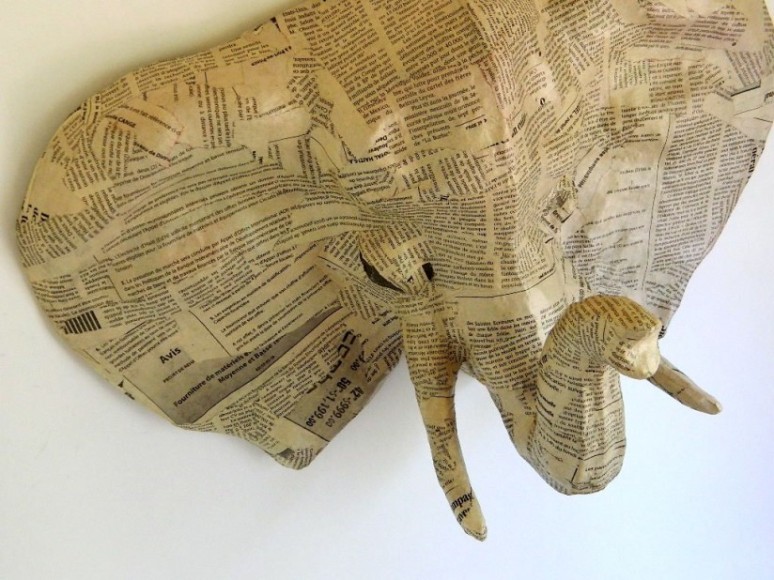 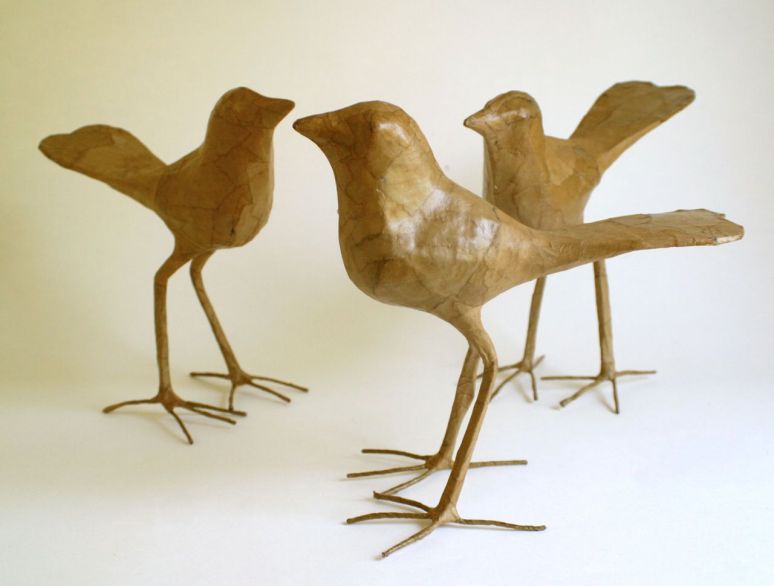 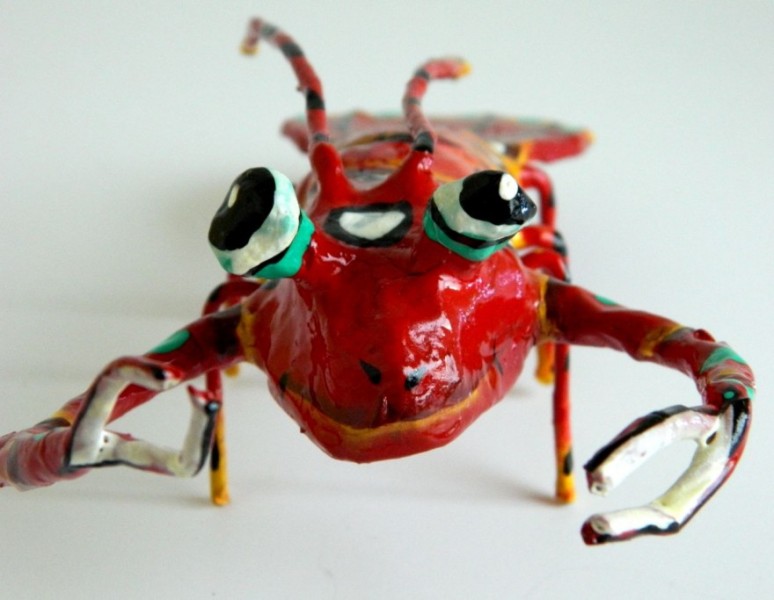 The entire papier-mache operation is now located at Barthold’s home in the hills of Martissant, a district of Port-au-Prince.  We stopped there on the way back from Jacmel, navigating ungraded roads and the usual plethora of cars, people and street merchandising to get there. The actual road to Barthold’s house is so rocky (eroded down to the bedrock) that it’s unnavigable by car. So we got out and walked up the hill. 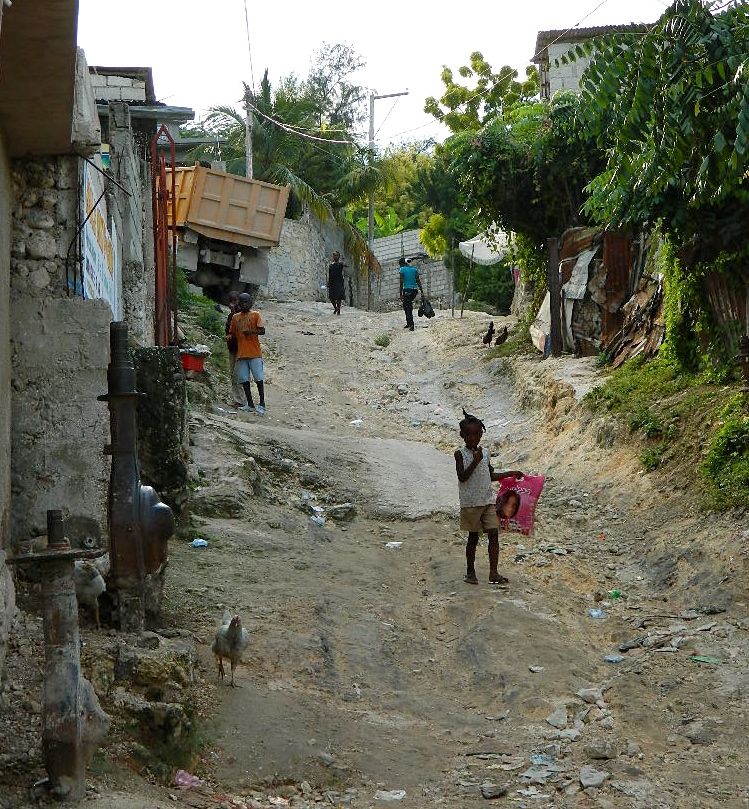 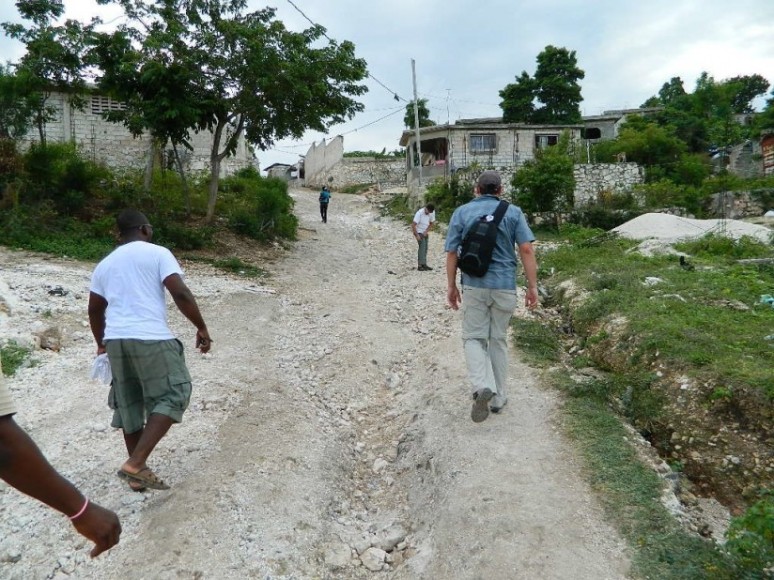 And one more. It was hot and very humid and I cursed my jeans every step of the way (what was I thinking??) 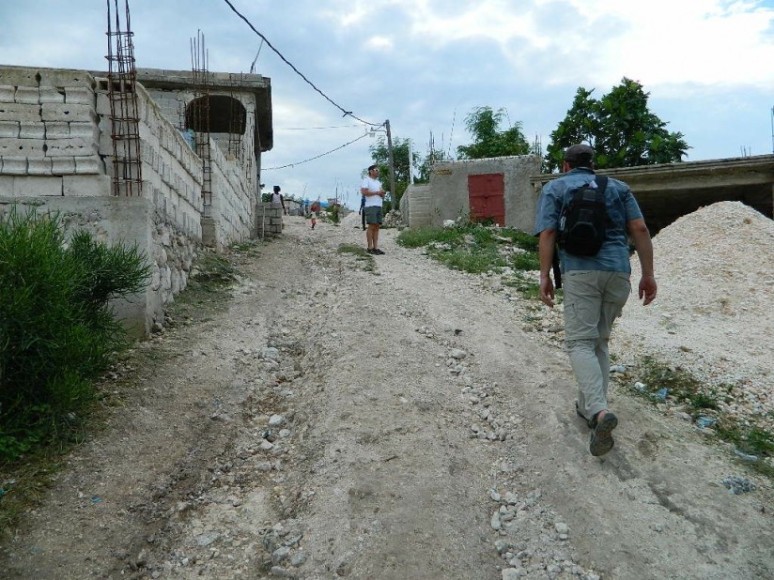 One-third of a steep, sweaty mile later, we arrived at Barthold’s house, where children were running around (he has five), and a helper was painting excellent tropical ant-spiders. 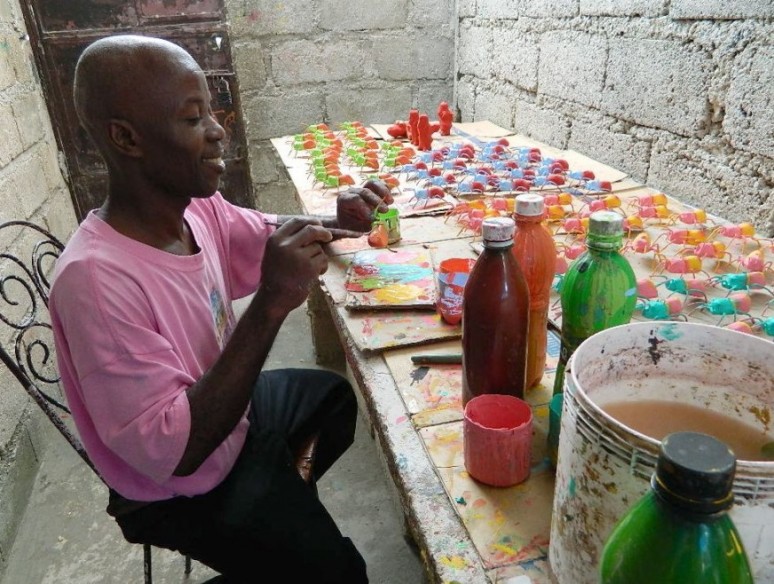 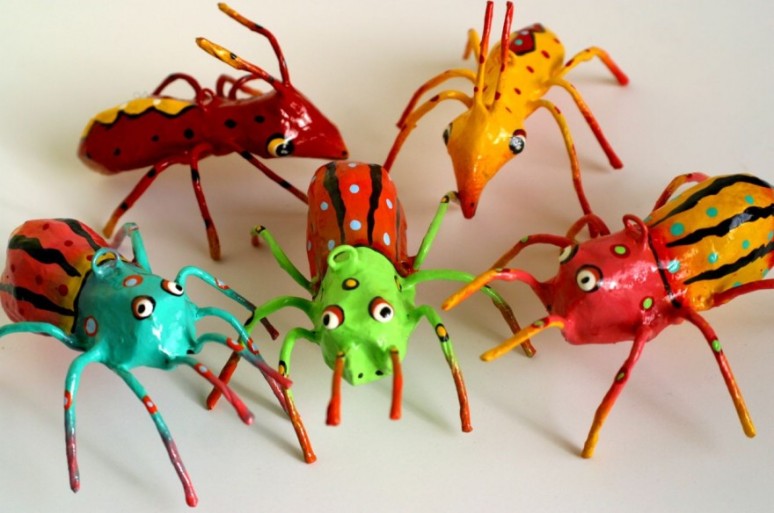 It was my great pleasure to meet Barthold in person–the shy and soft-spoken artist I’d heard so much about. I was able to bring profit-sharing from our Paper Turtles Etsy store and, just as importantly for me, I was able to tell Barthold (through Aly) that what he does matters. That his art is beautiful and people admire it, that I appreciate how hard he works, and I’m working hard for him and Aly, too. 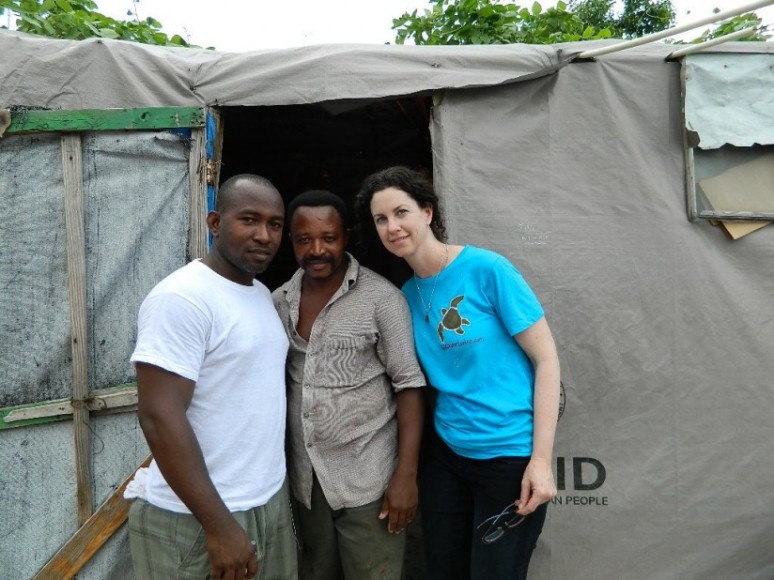 My appreciation for what Aly and Barthold do grew by about 1,000% when I looked around and took in the workspaces:  an open-air painting station under a tarp; and a 20′ x 20′ or so very-hot-hut made of US AID tarps, crammed with work in various states of finish. 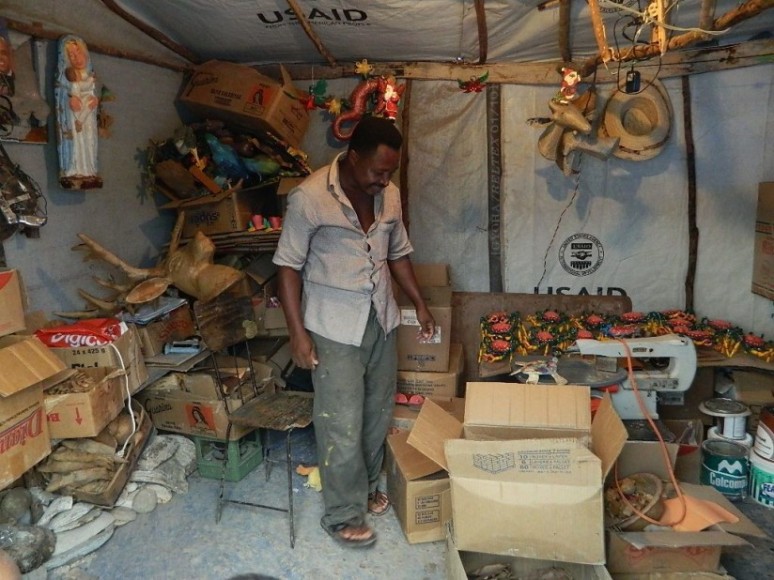 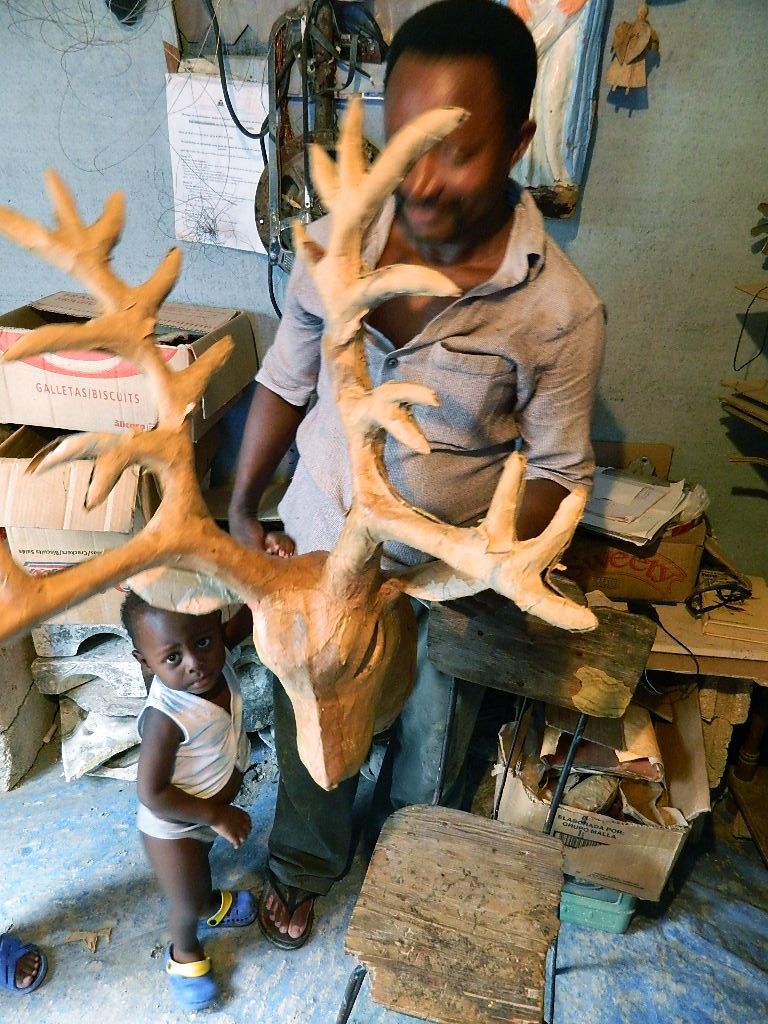 A beautiful deer in progress.

Sculptures dry outside on the wall, an obvious issue when it rains.  Aly wants to buy Barthold a fan so he can dry things more quickly under the tarps. 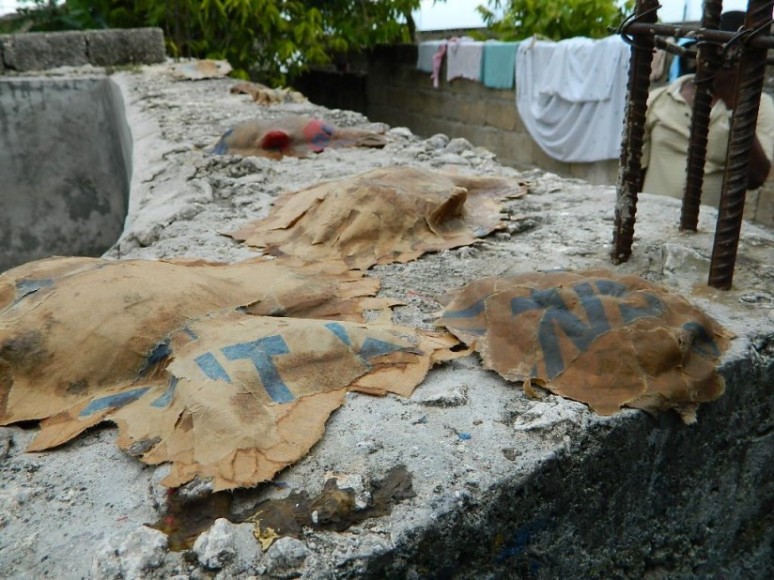 Incidentally, when I got home, I found that an awesome customer sent us a $100 donation (thanks Cindy!) which will be used to buy a fan.

Three artisans help Barthold with the papier-mache, as well as his older kids who sometimes help after school, and his wife, Anneleese, who paints.

Cement molds. Sculptures are a combination of molded and hand-cut pieces. 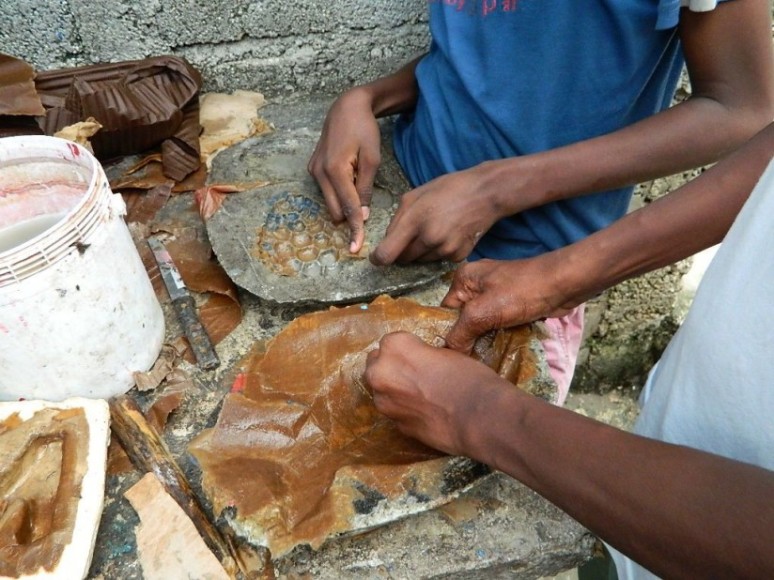 A fish and a turtle in progress. 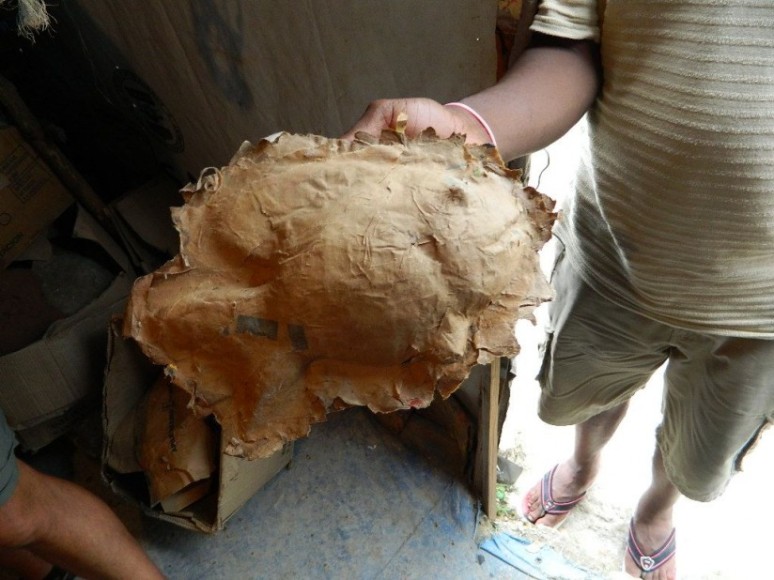 A fish in progress. The sculpture is made of recycled cement bags or newsprint. 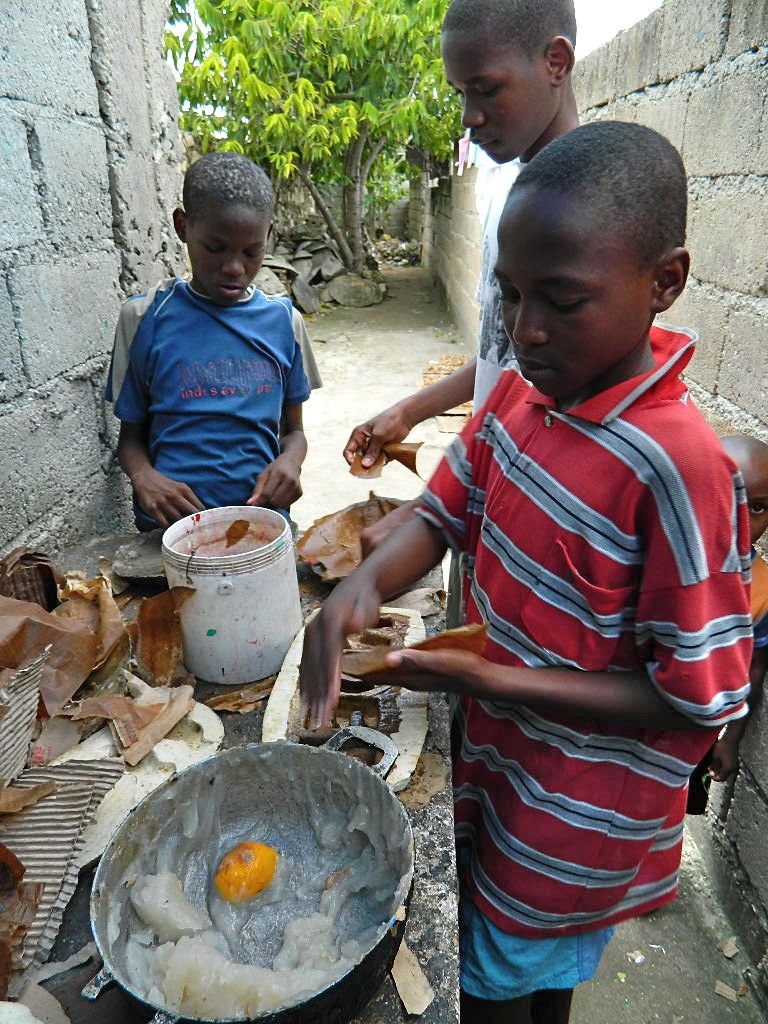 Papier-mache paste is a combination of glue and starch from manioc, or cassava, a tropical shrub whose tuberous roots are packed with carbohydrates and harvested for food.

I also occurred to me that every time Barthold finishes an order and is ready to ship, either he must carry the boxes down that 1/3 mi hill, or Aly must climb up and carry them down.  Aly’s truck was smashed in the earthquake, so he takes a bus or rents a car to get to Barthold’s neighborhood. I was amazed that anything at all happens there, let alone the production of work in the amount and quality I receive. It’s truly stunning.

At the end of our visit, Barthold gave each of us a sculpture to take home and Annelesse walked us back down the hill.  She told Aly that neighbors had already come to their house asking for money because white people were there. She said the same thing happens when the neighbors see boxes being picked up or walked down the hill.

idea: if Paper Turtle grows big enough, maybe Barthold can give them jobs? Maybe we can find a larger space, indoors with lots of fans?

Annelesse walked back up the hill, we piled into the Mitsubishi and started back the way we came. 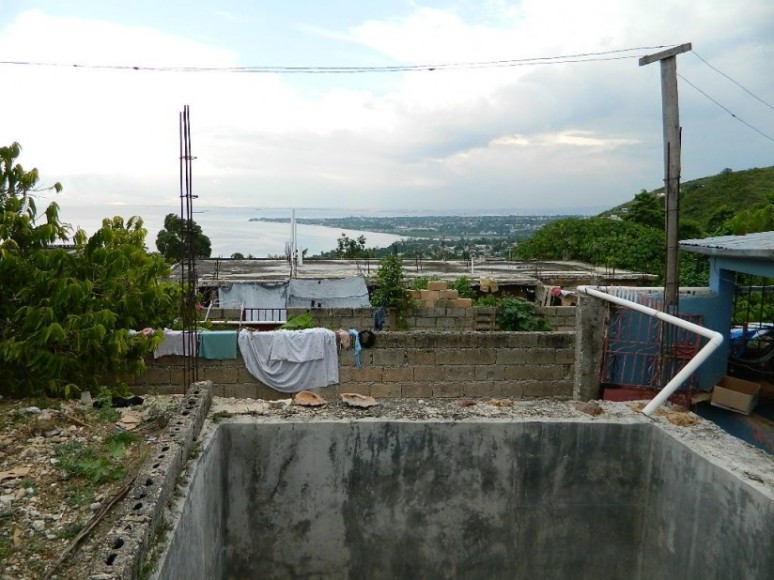 Part 2 of our final day will be a short wrap-up of the Haiti series: Aly’s house, the Kinam Hotel, and fried bananas on the way to the airport.