Colorado, Nebraska & A Brief History of the Wild Mustang

[If you’re visiting for the first time, this post is a continuation of our road trip through Comancheria: Palo Duro Canyon in the Texas panhandle, eastern Colorado, and Nebraska. My words are accompanied by those of SC Gwynne (italics) from his 2010 book, Empire of the Summer Moon. Thanks for joining us!] 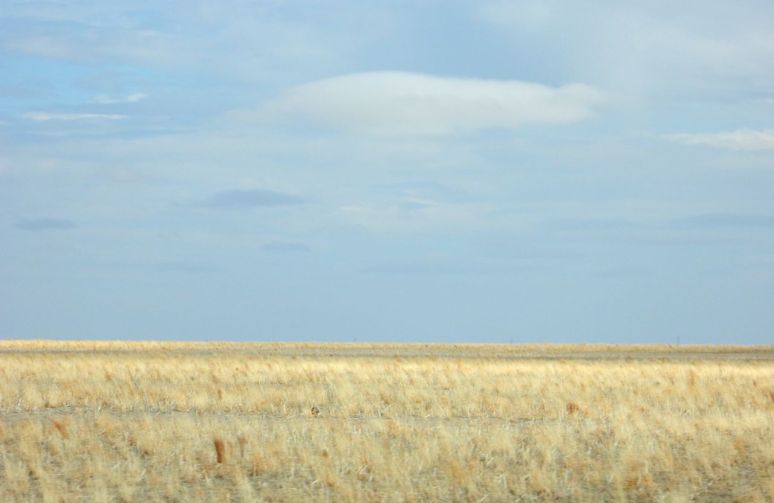 In its primeval state, almost all of North America, from the eastern coast to the 98th meridian…was densely timbered, and the contrast between the dense eastern woodlands and the “big sky” country of the west would have been stark. A traveler going west would have seen nothing like open prairie until he hit the 98th meridian, whereupon, in many places, he would have been literally staring out of a dark, Grimm Brothers forest at a treeless plain. It would have seemed to him a vast emptiness. At that point, everything the pioneer woodsman knew about how to survive–including building houses, making fire, and drawing water–broke down. It was why the plains were the very last part of the country to be settled.

On grey and rainy Saturday we traveled north along US 287 to Limon, Colorado, then further north to Nebraska the next day. We passed through the Comanche National Grasslands but unfortunately, there was nowhere to venture off the road and hike around. We experienced a momentary thrill (ok, I did) when we saw this sign in Campo, Colorado. 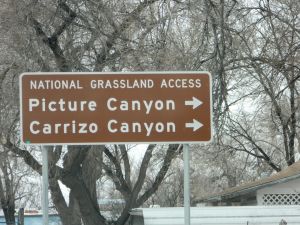 But the road ended here 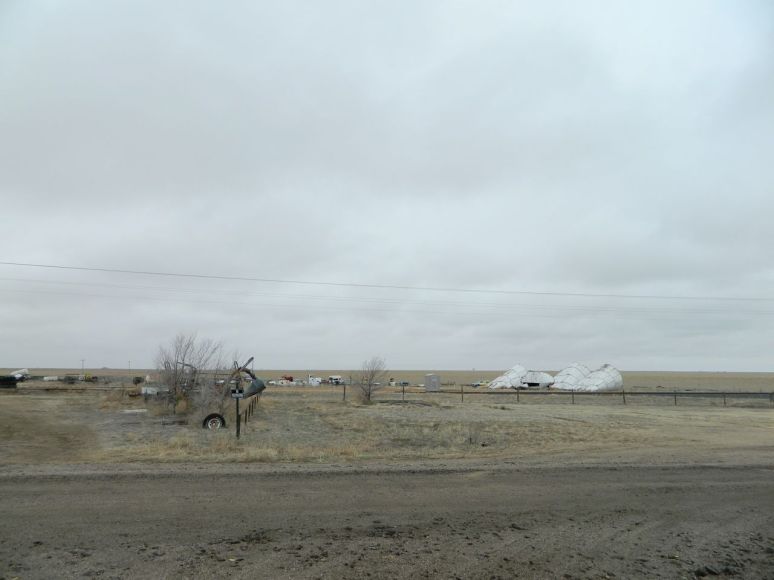 which was a little disappointing. We figured they filled in the canyons to build the railroad and just forgot to take down the sign. We also had trouble during this stretch with our borrowed GPS, which I believe has been compromised–lent to us by an Australian and therefore suspicious. More than once, we found ourselves following the directives of the disembodied, Australian-accented Miss, only to drive in a big loop through a trailer park or around the parking lot of an abandoned gas station. Then the machine would cackle, almost imperceptibly, and that creepy banjo song from Deliverance would start up. I think I can do without it on the way home. 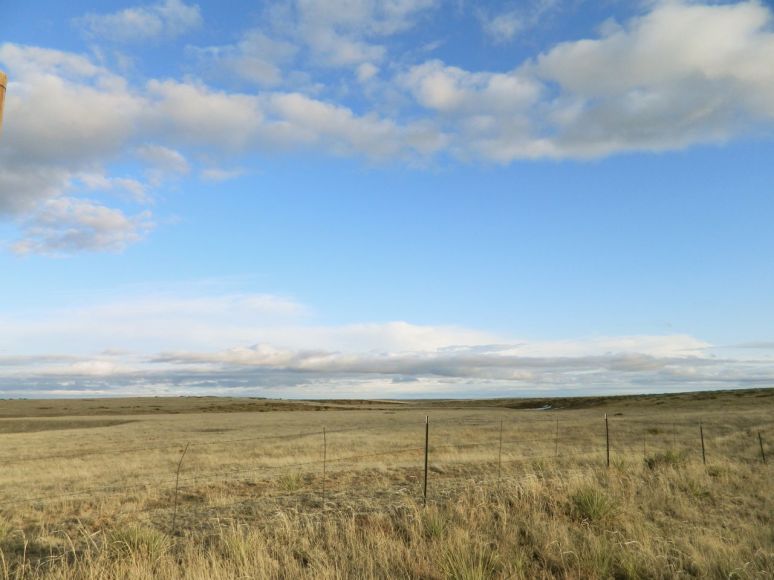 By the time the traveler reached modern-day Lubbock and Amarillo, he would have seen nothing but a dead flat and infinitely receding expanse of grama and buffalo grasses through which only a few gypsum-laced rivers ran and on which few landmarks if any would have been distinguishable. Travelers of the day described it as “oceanic,” which was not a term of beauty. They found it empty and terrifying. 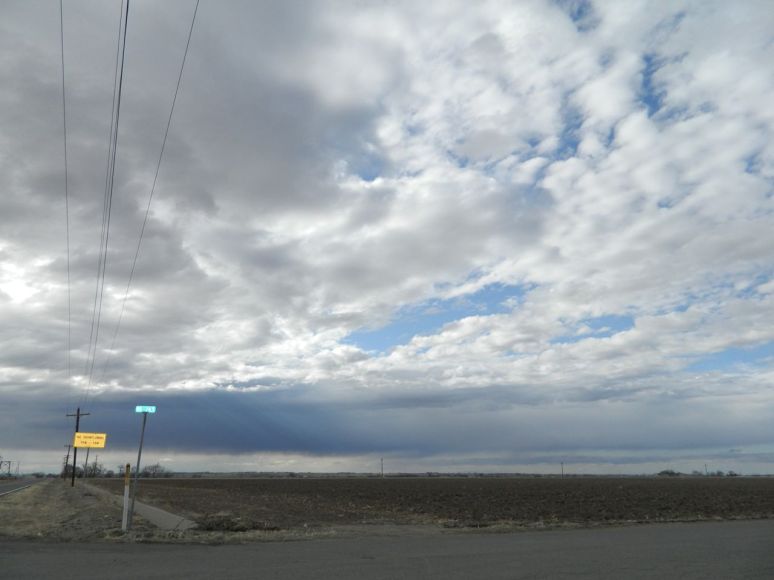 There were no horses at all on the continent until the Spanish introduced them in the sixteenth century. Their dispersal into wild mustang herds [after the Spanish abandoned their herds in 1680 after the Pueblo Indians kicked them out of New Mexico for 20 years] was exclusively a western event, confined to the plains and to the southwest, and accruing almost entirely to the benefit of the aboriginal inhabitants of those areas. This meant that no soldier or settler east of the Mississippi, going back to the first settlers, had ever encountered a mounted Indian warrior. There simply weren’t any. As time went by, of course, eastern Indians learned to ride horses, but that was long after they had surrendered, and no eastern, midwestern, or southern Native American tribe ever rode into battle. 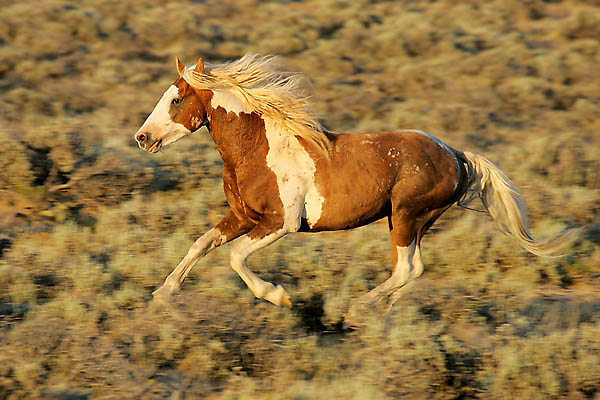 The Spanish horses were also, by the purest of accidents, brilliantly suited to the arid and semiarid plains and mesas of Mexico and the American West. The Iberian mustang was a far different creature from its larger grain-fed cousin from farther north in Europe. It was a desert horse, one whose remote ancestors had thrived on the level, dry steppes of central Asia…This horse didn’t look like much, but it was smart, fast, trainable, bred to live off the grasses of the hot Spanish plains and to go long distances between watering holes. 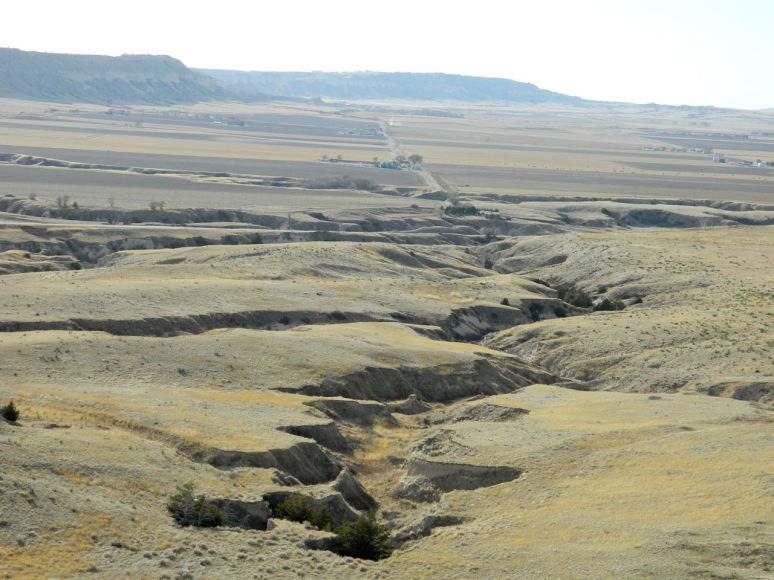 No one knows exactly how or when the Comanche bands in eastern Wyoming first encountered the horse, but that event probably happened somewhere near the midpoint of the seventeenth century…There were no witnesses to this great coming together of Stone Age hunters and horses, nothing to record what happened when they met, or what there was in the soul of the Comanche that understood the horse so much better than everyone else did….The Comanche adapted to the horse earlier and more completely than any other plains tribe. They are considered, without much debate, the prototype horse tribe in North America. No one could outride them or outshoot them from the back of a horse. Among other horse tribes, only the Kiowas fought entirely mounted, as the Comanches did…No tribe other than the Comanches ever learned to breed horses–an intensely demanding, knowledge-based skill that helped create enormous wealth for the tribe. They were always careful in the castration of the herd, almost all riding horses were geldings. Few other tribes bothered with this. It was not uncommon for a Comanche warrior to have one hundred to two hundred mounts, or for a chief to have fifteen hundred. 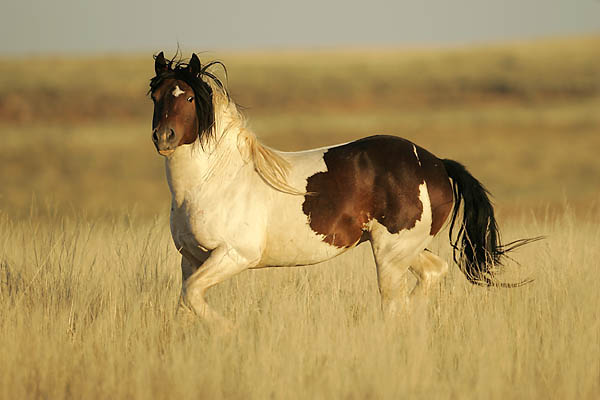 Colonel Richard Dodge, whose expedition made early contact with the Comanches, believed them to be the finest light cavalry in the world, superior to any mounted soldiers in Europe or America. Catlin also saw them as incomparable horsemen. As he described it, the American soldiers were dumbfounded at what they saw. “On their feet they are one of the most unattractive and slovenly looking races of Indians I have ever seen, but the moment they mount their horses, they seem at once metamorphosed,” wrote Catlin. “I am ready, without hesitation, to pronounce the Comanches the most extraordinary horsemen I have seen yet in all my travels.” 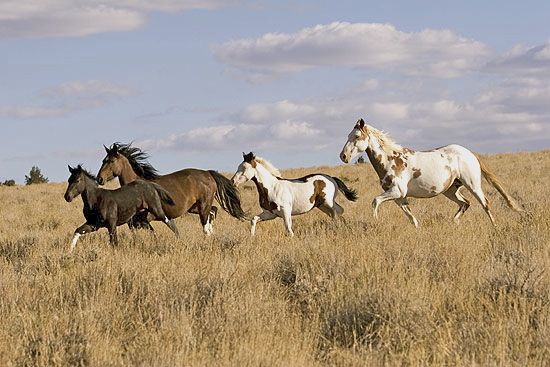 Other observers were amazed at the Comanche technique of breaking horses. A Comanche would lasso a wild horse, then tighten the noose, choking the horse and driving it to the ground. When it seemed as if the horse was nearly dead, the choking lariat was slacked. The horse finally rose, trembling and in a full lather. Its captor gently stroked its nose, ears, and forehead, then he put his mouth over the horse’s nostrils and blew air into its nose. The Indian would then throw a thong around the now-gentled horse’s lower jaw, mount up, and ride away.

I wish we had seen mustang or at least buffalo, but there were none.  Instead, we passed mostly through small, half-alive looking towns strung along the highway, connected by farms, ranches, and cows. Lots of cows. Sometimes on feed lots and sometimes on open land. Isabella marveled at just how strong and persistent the feed lot odors were, even in the towns. Send In the  Cows became the theme song for this stretch of the trip.

I once read  about how ill-equipped cattle were to survive on the Great Plains when they were introduced–unlike the innumerable buffalo, which were able to withstand temperatures as low as -30 and as high as 115, creatures in perfect symbiotic relationship with the Plains Indians whose continuous pursuit of them guaranteed there would be no overgrazing. I’m amazed at the fate of the buffalo vs. cows, and the permanent alteration of the Western and Southwestern landscapes caused by cattle growing. 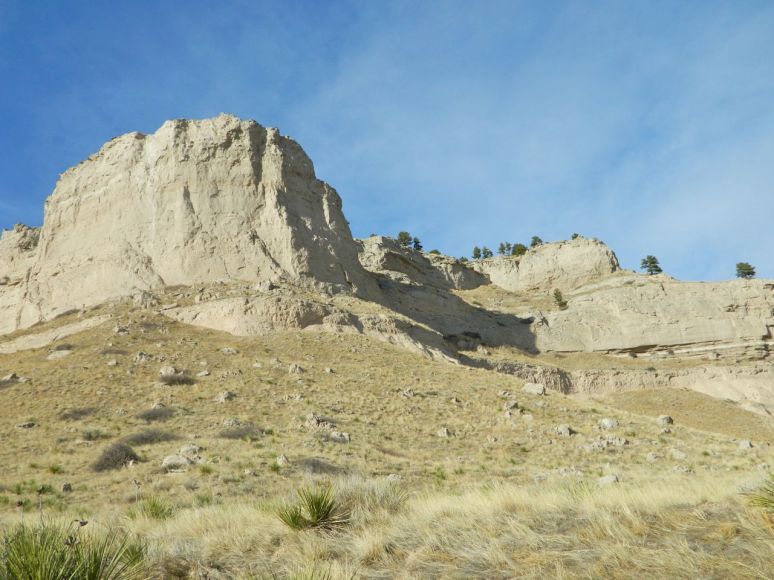 We arrived at our destination–the indomitable Great-Grandma Jessie in Scottsbluff, Nebraska–on Sunday, and stayed up into the wee hours (9:30) enjoying each other’s company. Today, after she taught us how to make a strawberry pie, we visited the actual Scotts Bluff (national monument) of Scottsbluff. It was a landmark of the Oregon Trail, and beautiful in the afternoon sun. 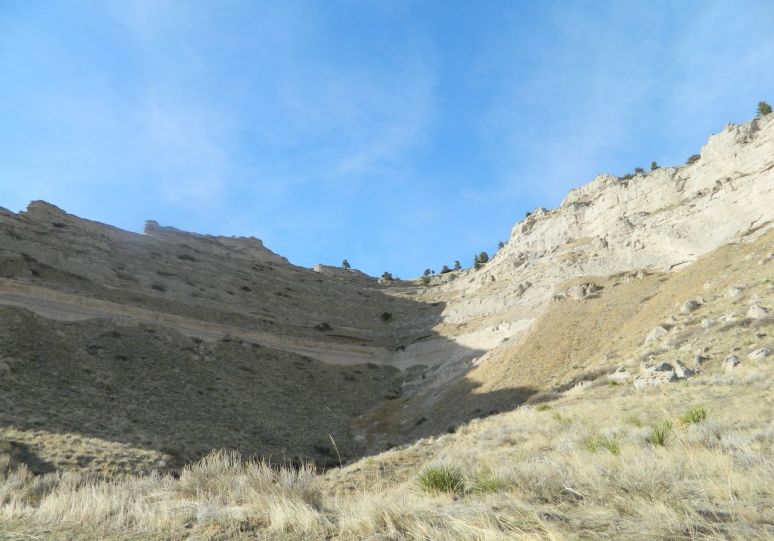 We leave for Albuquerque Thursday morning and plan to drive down through Colorado.  I’ll finish this road trip series along the way or after we get home. Thanks, as always, for reading.

Mustang images from here and here

14 thoughts on “Colorado, Nebraska & A Brief History of the Wild Mustang”