Why you might not want a duck (Part I)

One Spring day when Isabella was around nine, we went to my favorite nursery, Alameda Greenhouse to buy our garden plants.  The first thing we saw when we walked in were ducklings for sale in a cage on the floor. I’m not sure why they were there, but I think the owner, Steve, loves animals and bought them from the feed store up the road. Just to have them. Anyway, as you know, we have a pond, so inquiring about the ducklings seemed natural enough. Steve told us that ducks make wonderful pets — low-maintenance, friendly, perfect in a pond. We left that day with $100 worth of plants and two baby ducks.

We arrived home, built a little pen, and Isabella named the ducks Kennery and Rose Petal. I have to admit, ducklings are really cute. Fuzzy, peepy, devoted. When they were old enough, we let them swim in the pond and that was really cute. But then they started to grow up. Fuzz turned to feathers. Squeaks became quacks. We learned a few things about ducks:

#1 thing you might not know about ducks: they will trash your pond. Tear up every plant, eat all the tadpoles, dive to the bottom and stir up the muck.

#2 after ingesting your pond, they will poop it out all over your lovely yard.

#3 ducks can run. If you have a dog with a strong prey instinct, running will inspire your dog to go duck hunting.  Certain dogs and ducks must be kept separate.

#4 One word: “imprint”. Yes, your duck will be your biggest fan, following you around like one of those cartoon characters with hearts popping out of its eyes and an aaah-OOOOO-gah! sound-effect. Quacking and pooping, running to keep up with you. They learn the sound of your voice, they bond. It doesn’t matter that the duck has a companion, he will want you more.

It soon became clear that despite our great affection for the idea of having a pastoral, duck-inhabited scene in our backyard, the reality was just not workable. Among other issues, we were going on vacation in a few weeks and could not leave the dog and ducks together with a house-sitter. It was a hard decision, but we knew it was the right one:  adolescent ducks must go. We considered our options and decided the best thing for Rose Petal and Kennery would be a life of freedom at the University Duck Pond. 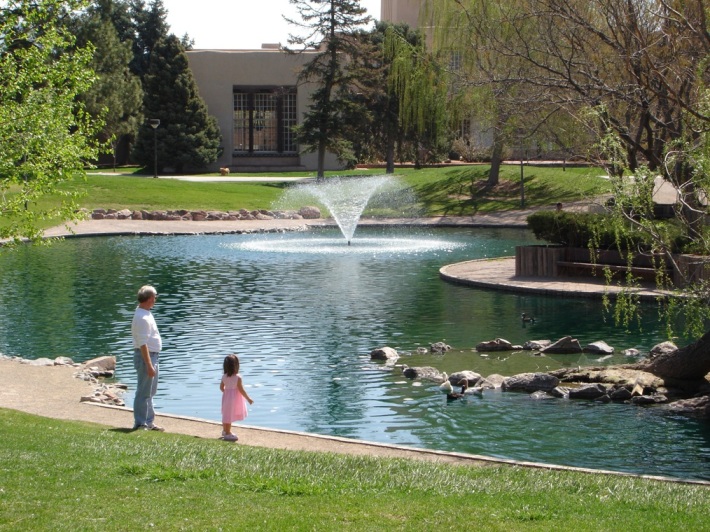 What’s not to love?! Oh, yeah, when half of your friends disappear.

But then I had a conversation with my friend, a source who shall remain nameless, who worked at UNM for more than 20 years. She told me that every so often, the pond needs to be cleaned and the population of giant gold-fish, turtles, and ducks… reduced. This is accomplished by draining the pond and inviting local Asian-restaurant owners to, er, harvest whatever they wish — hey, I’m just reporting here — for their own purposes.  It’s possible that my friend just made that up, but it seems unlikely, and she did have a point: in a man-made ecosystem with no natural predators, how else was the animal population kept tidy and manageable? We could take no chances.

I called a few fishing ponds on the outskirts of town and asked if they would take our ducks, but they were not enthusiastic. They told me that people often “dumped” pet ducks without asking, the ducks were ill-equipped to live in the wild, and were usually eaten by coyotes. Crossed that option off the list.

Then it came to me, like a message delivered by Hermes himself:

The Rio Grande Nature Center! The perfect place to relocate our ducks because they could learn how to be wild from the dozens of wild ducks that lived there already. There were islands in the waterway where coyotes couldn’t go. Hallelujah! A plan was made.

A few days later, we arrived to the Rio Grande Nature Center, each of us with a backpack containing a noisy duck (you can imagine here all the quackpack jokes). We walked toward the pond area, crossed the Do Not Enter ropes, and stopped at the water’s edge. It seemed a wonderful place for release, with plenty of food, water, and other ducks. We took Kennery and Rose Petal out of the backpacks, placed them near the water, and bid them farewell…