Being an artist is not easy. Especially when you’re young and you don’t know you’re an artist. What you do know when you’re a young, unknowing artist, is that you are strange. And you feel compelled to make things. You don’t quite fit in and you don’t know why, just that you are most comfortable taking it all in from the sidelines and then marching to the beat of your own drum.

I’m fairly certain that making “roach corsages” or assembling a “maggot circus” — Easter eggs  + three months in sock drawer = pet worms! — or keeping a disembodied rooster leg from a 4-H slaughter demo because it’s fun to “grab” things (like your sister’s hair) with the foot, would probably not be considered normal activities for a child of any age.  But I did all of those things (and thank you mother, for not stopping me. Except for the maggots, and that is entirely understandable.) Plus, I made my own Halloween costumes. Always. 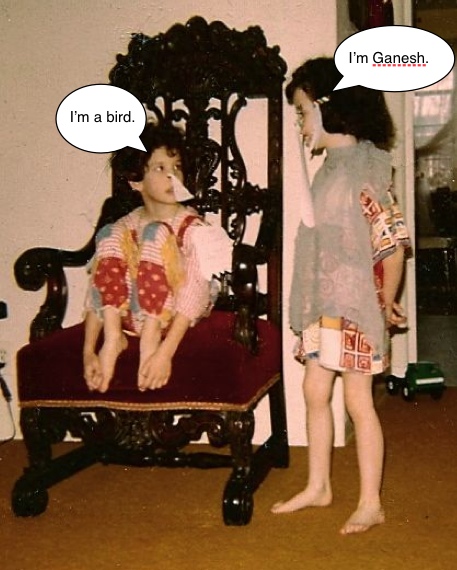 Homemade. Can you tell?

Halloween was my favorite holiday. It was a rare opportunity for outlandishness and ingenuity to be celebrated with rituals, parades, and carnivals, and for the crafty impulses of formative artists to be validated with the praise and admiration of friends, family, and candy distributors everywhere. It also afforded an unknowing, introverted artist like myself the rare occasion to both hide and show off at the same time. A perfect equilibrium of presence.

I gloried in the seasonal manifestations of my own creative expression, deeply satisfied with the processes, the individuality, the sheer differentness of the homemade costumes for which I sometimes won prizes.  And I insisted on making everything by myself. Maybe so that no one else could share in the bounty of my success, I don’t know. Or maybe it’s hereditary, as Isabella exhibits this same tendency. (One of her favorite phrases by the age of two was By –  my – SELF!!  But she couldn’t actually pronounce the word “self,” so it came out as SALUPS!) 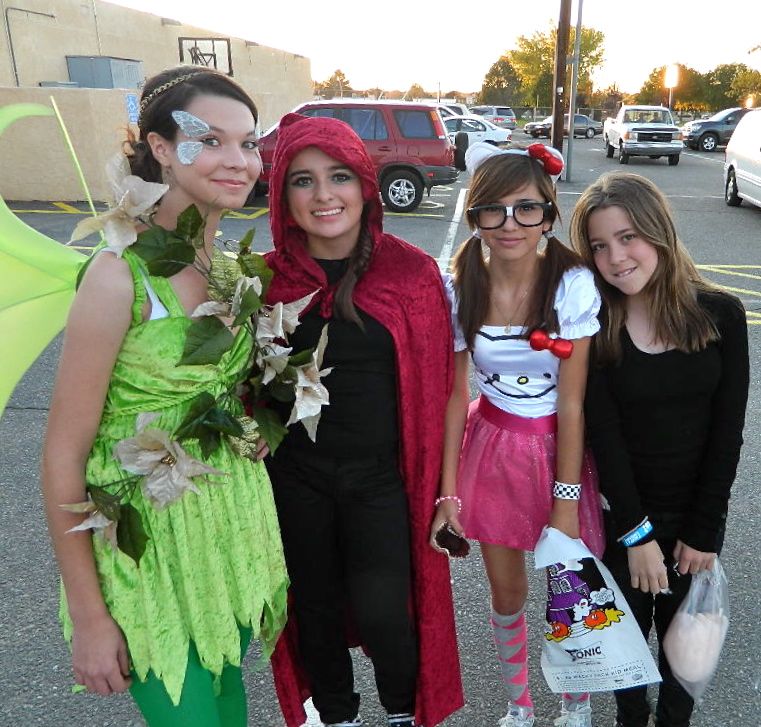 Guess which one is Isabella?!

My love of Halloween took a dramatic turn in the sixth grade. I was new to St. Mary’s School, having transferred from a public school in another part of town. Some of the changes were expected — the plaid uniforms, new friends, the Jesus Corner — while others were not.  For example, I did not expect to be an ethnic minority among my Hispanic classmates, and I did not expect to be known throughout my grade as Casper the String Bean. 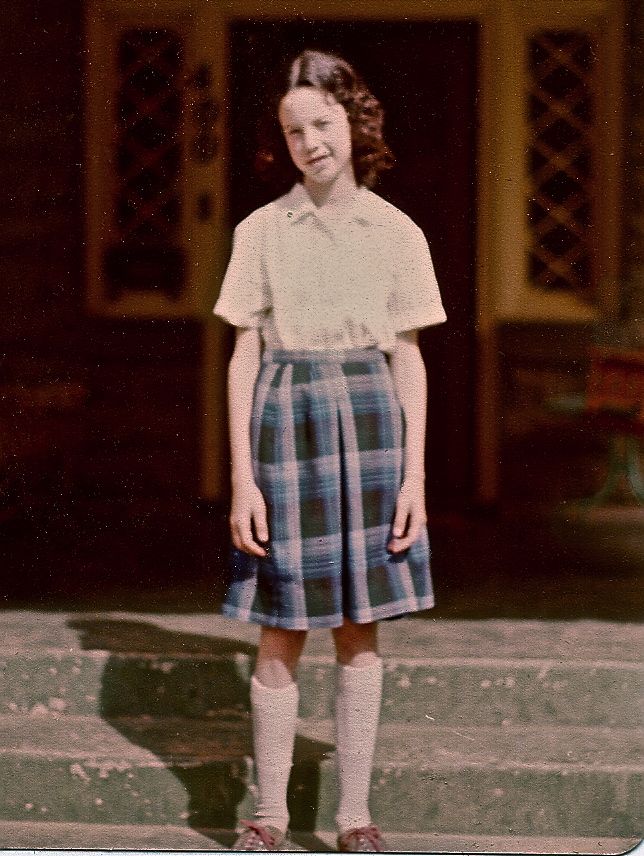 Hi, I’m Casper. If I slouch, I can almost touch my fingertips to my knees.

In any event, artisanal Halloween costumes had been a staple of my childhood since forever, so I certainly did not expect that to change.

September, 1977: after a great many weeks of imagining an appropriately extravagant costume for my St. Mary’s Halloween Carnival debut, I came up with the idea, the magnificent idea, to dress as a giant chicken. For some reason, there are no photos of this particular costume*, so I have re-constructed my design process here, presenting a rare glimpse into the mysterious inner workings of an 11-year-old artist’s mind.
*Never made it out of the Kodak Instamatic

1. First, I looked for fabric with sprouting feathers (think Big Bird or a huge boa), but found none. So I settled on fake fur.

I folded it over, laid it on the floor and cut out a basic chicken shape. I sewed the two sides together by hand. 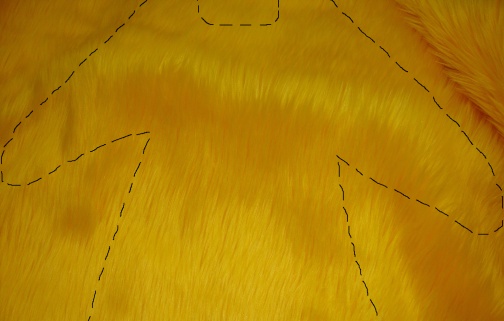 2. Since I didn’t know how to transition the body into legs (you’d think the rooster experience would’ve helped),  I added a skirt. 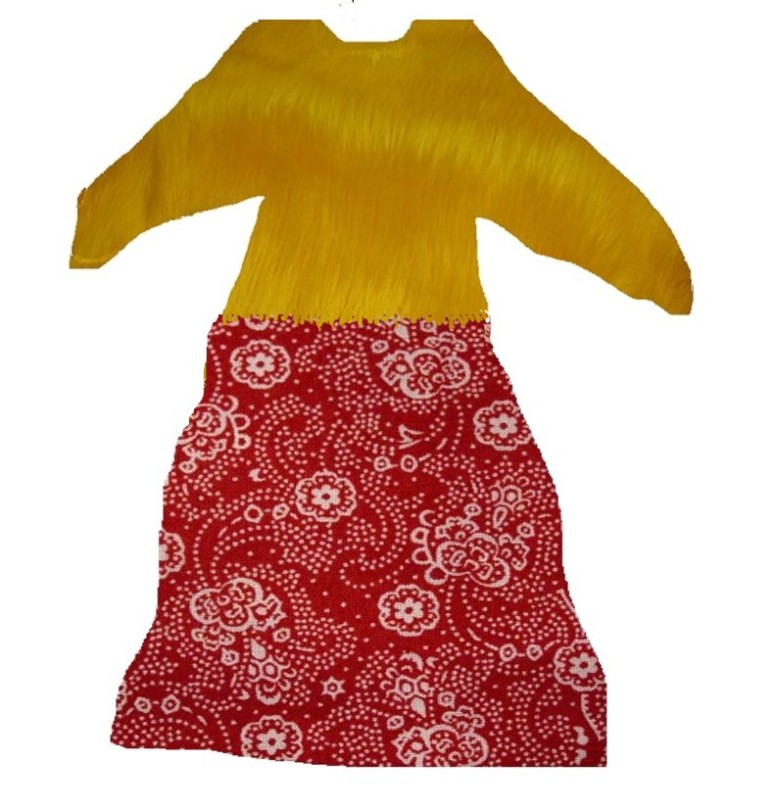 3. Next, I found some striped socks for the legs. 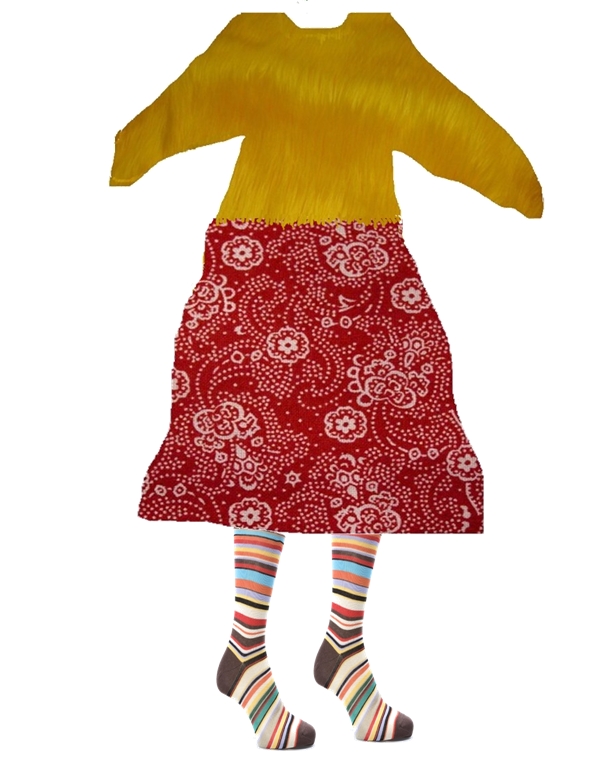 4. And what chicken suit would be complete without monster gloves for feet?! 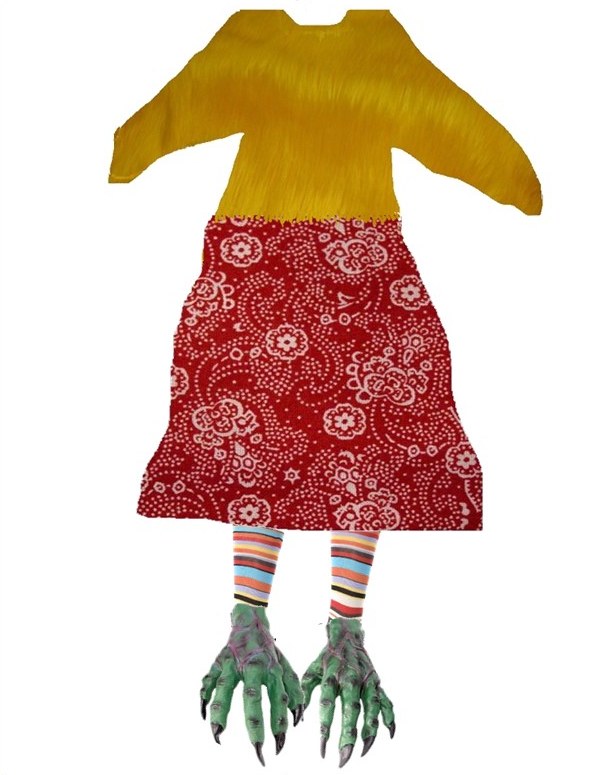 Final accessories included a furry hat with a stuffed rubber-glove “comb,” a basket full of plastic L’Eggs pantyhose eggs (remember those, ladies?), and a pillow strapped to my belly to round out the form.

I was indescribably excited as I got out of the car and made my way to the gym for the carnival. As I walked east down the hallway, the waning evening sun streamed through the glass-windowed doors behind me, certainly imparting a shimmering, glowie quality to my overall miraculous appearance. Not dissimilar to Our Holy Mother, herself.

I made it approximately 15 feet before some of my new classmates — a group of boys — spotted me and stopped dead in their tracks. Squinting, looking me up and down, conferring with each other, pointing at my back-lit form,

“A la ve-! (holy vagina!), is that… Lora?” they half-wondered, half-ridiculed in their distinct New Mexican-Hispanic accents. 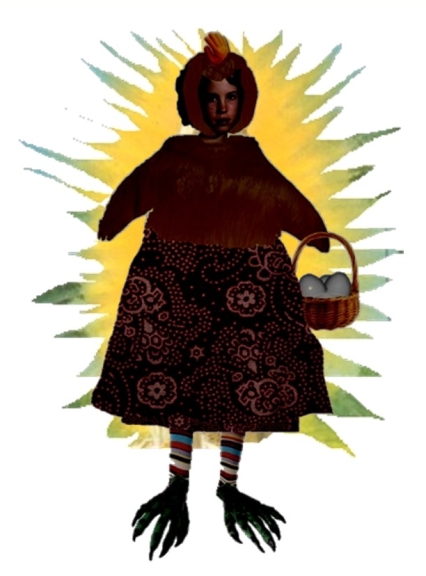 The smile that would’ve spread across my face shriveled as I stared back at them and observed that not only were these some of the most popular boys, they were not in costume. At all. Not one of them. I frantically scanned the hallway and saw that NO ONE my age seemed to be dressed up, only the younger kids. I was, by all indications, the singular middle-schooler in costume. And not just any witch or fairy or ghost, but a huge, flocculent, monster-footed chicken. Wearing an f-ing skirt.

My sense of pride and accomplishment and love for all things Halloween disintegrated in that moment. The moment I realized that the carnival at St. Mary’s School was not an occasion for middle schoolers to revel in creative expression and eccentricity, but to be cool and comely and wear trendy clothes, evidence of their elevated status among the elementary kids. It was a time to navigate the social pyramid in the repressive, yet sexually charged Catholic middle school environment where clandestine couples were already forming. And there I stood. Frozen in a vapor of self-conscious dread with my basket of large, plastic ovum. 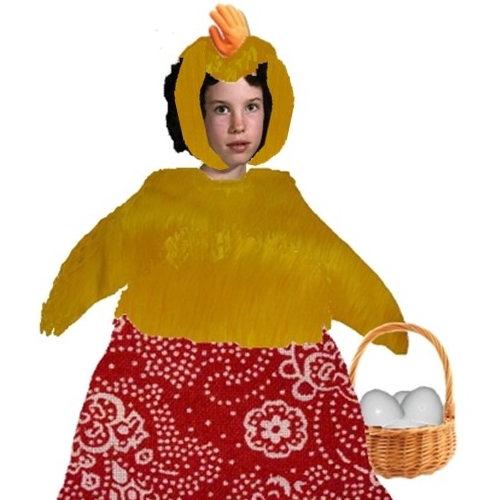 Suddenly, my fight or flight instinct kicked in and I raced (more like, flapped and thwacked, thank you Jesus that I did not fall) to the bathroom and locked myself in a stall where I promptly burst into tears. embarrassed and grief-stricken, I refused to come out unless my mom went home and got me normal clothes. Fortunately, our house was only eight blocks away (and I have a really nice mom) and she was back within 20 minutes.

I’d love to tell you what happened next, but it’s a blank. I assume that after composing myself in the privacy of the bathroom stall, my family and I stayed at the carnival for a while, where they had fun and I denied ever being dressed up.

But really, I have no memory of it. So traumatized was I by the experience, and the awareness that those boys were, I was certain, destroying my fragile dignity by spreading the story of Casper the Large Poultry, that I mentally opted out of the rest of the evening.  The Awkward Hole into which I had already decended as one of the tallest, palest, and most introverted students in the entire junior high was further excavated.

Something died that night, in that inelegant confrontation between me and the boys in the shadow of a giant chicken. Something that signaled the close of one more chapter of my childhood. My unknowing-artist impulses were deftly overpowered by the anxiety and insecurity of adolescence. Where once I had strived to gain acceptance by being brilliantly exotic, I now felt an intense need to disappear. My creativity had become my shame.

This didn’t last forever, of course. I eventually understood that my compulsion to make things, and tendencies toward strangeness were not freakish (exactly), but part of being an artist.  An interminable code stamped into my DNA.

Halloween became fun for other reasons but never really regained its original luster. How could it? Growing up ushered in the transformation of sacred mountains of candy into ruinous fat and calories; costumes became less an opportunity and more an obligation; trick-or-treating was something you answered the door to. But still, there are my favorites: the pumpkins, the roasted seeds, and the creepy stories. Always the stories. 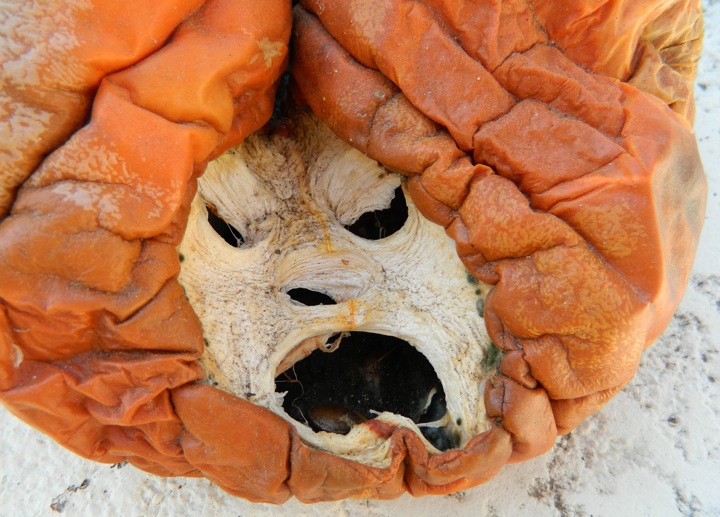 13 thoughts on “The Golden Chicken Suit that Changed Halloween Forever”