When the Japanese mend broken objects, they aggrandize the damage by filling the cracks with gold. They believe that when something’s suffered damage and has a history it becomes more beautiful. ~Barbara Bloom, Artist

This is an ornament I just finished for my friend Marc. And there’s a story that goes with it.

It all started when I had an idea to sell some cloud balls in my Etsy store this year for the holidays. 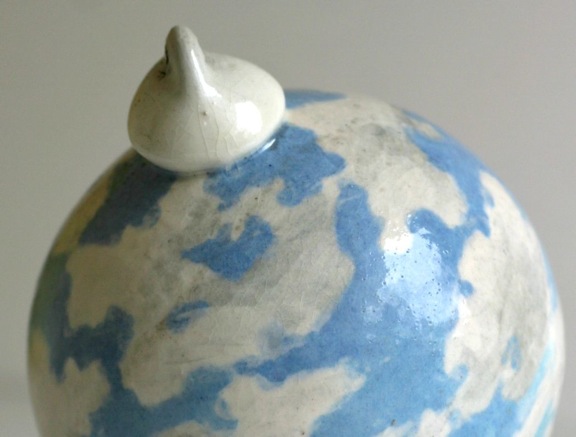 Marc saw this on Facebook and asked if they were happy or unhappy clouds. We have a long-standing joke about unhappy clouds dating back to our days in the film/television industry when he worked as a carpenter and I worked as a scenic painter. That’s how we met, working on sets together. I remember him telling me that he was really a painter, just working in the film industry until he got established in New Mexico. Right, I thought, everyone’s an artist…

Back in 1995, Marc was working on some commercial or another, building and painting a sky backdrop that would be seen through a kitchen window, and he had a problem. The client thought his clouds looked too dark, and Marc didn’t know how to fix them. I was called in for emergency cloud lessons.

At the time, the problem seemed skill related, as cloud rendering had not been high-ranking among Marc’s past experiences as musician, finish carpenter, and art student. But over the next 14 years as Marc transitioned out of the film industry and into a career as a gallery-represented painter, I came to understand that this was not the case.  In fact, he is a very talented painter whose work is an exact and necessary reflection of his general constitution: grim. More concerned with the reptilian underbelly of the world than its shiny skin, Marc’s a self-proclaimed cynic whose paintings are mysterious, beautiful, and yes, dark.

Self Portrait, courtesy of Box Gallery

I helped Marc transform his morose, stormy cumuli into things blissful floating, the kind of euphoric scene you would expect to see when gazing out your window appreciating the effects of your new dishwasher soap, or whatever was being sold. The client was happy with our happy sky and Marc seemed impressed. Little did I know then that I’d spend the next 14 years painting clouds of all manner. 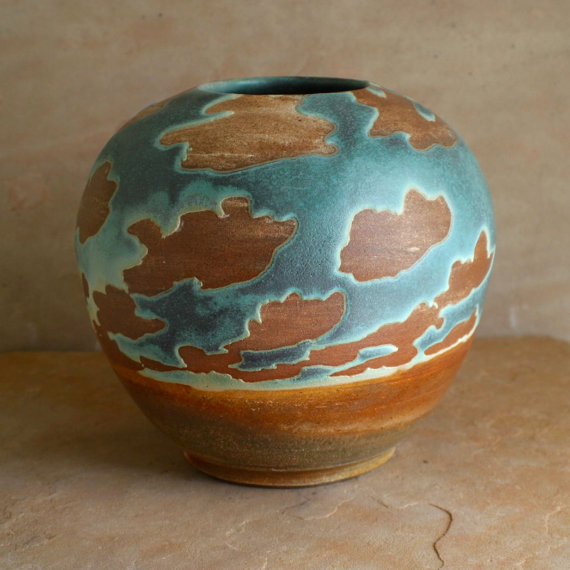 So when Marc told me a few weeks ago on Facebook that he wanted an ornament with angry, unhappy clouds, what choice did I have? I painted this one on a (rare) rainy day when I was in a (rare) bad mood, using lots of gray, and dark blue for the sky. I glazed it with a translucent green instead of clear, just to make sure that any unpainted bits would not be white. Eliminating the risk of renegade effervescence.

When the ornament was ready to be fired, I placed it on a shelf for a few moments surrounded by a paperclips (to keep it from rolling) while I gathered my things to leave. Then, in a startling violation of physical law… smash!

The shattered ornament lay on the floor beneath the shelf where I had carefully placed it. Why would it do this, I thought, why? Ah, because it’s Marc’s, that’s why. Of course. Good one, I thought, nicely played, but this is not over. On examination of the shattered orb I noticed that it had broken into a dozen rather than a million pieces, and it could therefore be saved. Bring on the epoxy. I fired the broken pieces, then spent twice the amount of time it had taken me to paint the thing glueing it back together. Success.

Like everything I make with clay, this ornament is what it wanted to be. Born of a partnership between me and the living materials of the earth, a give and take, a process of mutual response and discovery. And it is perfect for Marc. 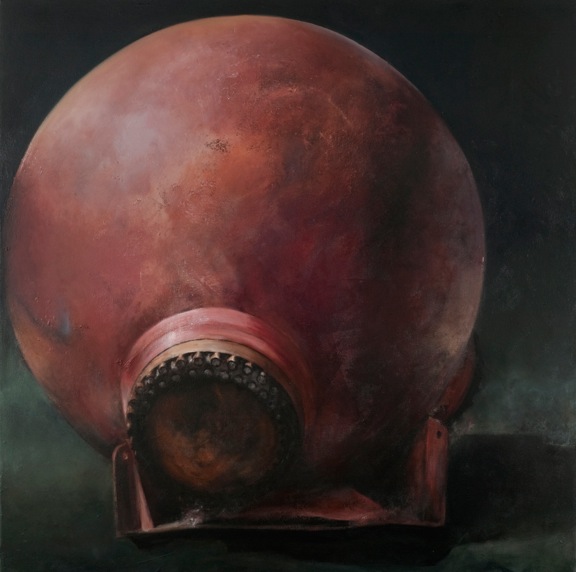 Six or seven years ago, Marc was diagnosed with a malignant tumor. I can’t recall the exact name, just that it reached its stringy fingers into the soft folds and curls of his brain to squeeze his words and disturb motor skills. He was very fortunate to have a successful surgery that removed the tumor with limited side-effects. It came back a few years later, and again it was successfully removed. At that time, the doctors told Marc that if the tumor returned again, they would need to treat it with a highly toxic chemotherapy. And he said no, he would not do that. Instead, he opted for prevention through nutrition and other alternative methods, and for five years has remained cancer-free.

Contrasting his predilection for dour reclusiveness, Marc lives a very creative and conscious life as a devoted father, loving husband, gardener, foodie, and friend with a wry black humor. We tread common ground in those areas, as well as an introversion bordering on anti-social, a love of solitude behind which party invitations go to die. He is one of my very favorite people.

I hope he enjoys this gift, one part ornament and one part story. An object made more beautiful by its history, a celebration of brokenness, a cracked sky or earth, a mended skull.