Wabi-sabi represents a comprehensive Japanese world-view or aesthetic centered on the acceptance of transience and imperfection. The aesthetic is sometimes described as one of beauty that is “imperfect, impermanent, and incomplete”. Wabi-sabi nurtures all that is authentic by acknowledging three simple realities: nothing lasts, nothing is finished, and nothing is perfect.

Good morning! I’d like to start with a big welcome to new subscribers, thanks for reading! This wouldn’t be nearly as much fun without my audience of five. Now, on to the exciting news of the day…

If you read my last post, you’ll know that I’m in studio mania, getting ready for the anagama wood-fire that will happen later this month near Madrid.

*teaching moment*
Anagama kilns like ours originated in Korea around 1600 BC, and produce pottery with unique glaze (melted wood ash that combines with flame and minerals in the clay) and flashing (where the fire touch the wares). Wood-fired pottery is considered the most durable of all ceramics, having survived temperatures of up to 2200 F.

Last week, we spent most of Sunday prepping the wood: cutting, sorting, and stacking six cords of lumberyard scraps into tidy piles like this one.

Wood prep is  a great workout and time to bond with the rest of the crew before the firing. It’s important to be on good terms with your fellow potters, as your work will literally be in their hands. More on that later. 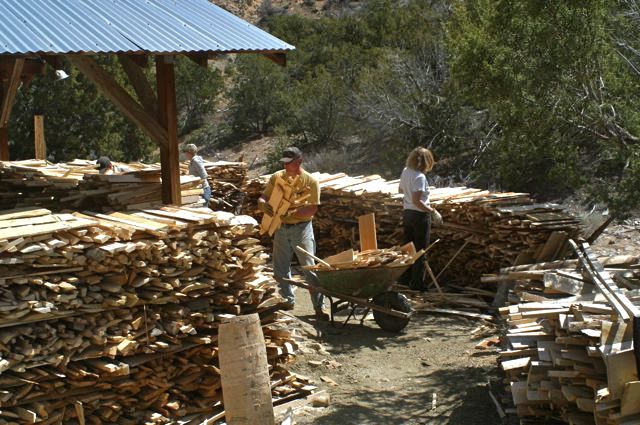 You may also recall from my last post a rather melodramatic musing on the nature of imperfection, namely, my own. The questioning of choices and motives, or the unsightly bits that rarely make an appearance except in times of stress or vulnerability. I’m sure you can relate, as everyone has their own inner fiend that may or may not be acknowledged, hidden, or occasionally walked on a leash through the dark, music-less hellscape of their own introspection.

So, for this contest, I want to go Wabi-sabi, celebrate “imperfections,” acknowledge their beauty as part of the unfathomable whole, bring them into the [fire]light, as it were. I hope you’ll play along.

1. Simply tell me about one of your best failures, humiliations, or embarrassments in the comments below. It doesn’t have to be long and detailed, just so the mortifying essence is communicated. Include your initials somewhere in the comment.

2. I’ll paint each entrant’s initials on the bottoms of  these poppy cups.

3. The cups will then be loaded into the kiln March 23-24 by me and 12 other people, totally random placement.

4. The cup that suffers the most “damage,” or is the biggest “wreckage” wins! (In the event of multiple failures, winner will be selected by random drawing or vote.)

5. Winner receives not only his or her own “loser” cup, but their choice of any other cup, bowl, or vase from this firing! (unless it is already spoken for)!

1. Stories must be true.

2. One entry per person. BONUS: double entry for any failure submitted in Haiku or Limerick format!

Damage? How could any of these pieces that you’ve spent approximately 17,000 hours on be anything less than perfect?
It’s the nature of wood-firing, and working with clay in general, and life in general, that not every piece or person survives unscathed. Cracks, breakage, sticking to the shelf, death, trauma, abuse, cold spots in the kiln… The list of potential “flaws” is endless and uncontrollable.

See what I mean?

Humiliation? Embarrassing moment? What you mean?
Anything as basic as a divorce or epic trip and fall, to complex and timeless like this, one of my personal classics: That time in college when I ran into the bathroom (forgot it was Men’s) for water because my mouth was on fire from stupidly agreeing to try some guy’s chewing tobacco. Wearing flip-flops, I slid in a puddle of I don’t know what, fell on my butt and continued sliding until my forward trajectory was interrupted by a pants-down guy at the urinal. A guy who happened to be the roommate of my biggest crush.

The winner really gets to pick any other piece?
OMG!

Have fun, and thanks for entering!

21 thoughts on “Contest: Woodfire of Fortune”