Welcome back to Paris! Fortunately for us, our friend James (we’re near Geneva now) had a card reader to get our photos to the computer, so continuing with this travel series will be much more fun.

The Hotel St. Pierre where we stayed in the Latin Quarter was a great location because everything is within walking distance: food, train, and interesting sights. On the day we arrived, I used my five-word French vocabulary to say hello and give my name to the front desk clerk. He found our reservation on the computer, pointed to my name on the screen to confirm who I was, handed me the key and that was it. No credit card swipe, no signing of papers or passports, no telling me about check-out or amenities. It was perfect.

After stashing our things in our tiny, tiny room (organizing a narrow path to the bathroom), we headed out in search of food. After passing approximately 250 patissieries, we ran into Restaurant Indonesia Paris, which looked promising. And it was! We welcomed ourselves to Paris with spicy coconut curry with vegetables, and a warm tofu salad with peanut sauce, both of which were entirely delicious.

The next few days were spent hoofing it all around Paris, on and off the Metro, in and out of museums, gardens, and restaurants. I’ll just include a few of my favorites here to avoid inducing a Someone Else’s Vacation Pictures stupor upon my gracious and indulgent readers.

Sainte-Chapelle (loooong wait to get in) and Notre Dame were pretty stunning. Sainte Chapelle is known for its 50′ stained glass windows, and for being built with steel supports instead of  flying buttresses. The windows are undergoing a restoration whereby each panel is painstakingly removed, and each piece of damaged or broken glass within each panel is meticulously cleaned/replaced/repainted before being reassembled.

Only three more years until this little renovation project is completed.

Notre Dame was huge and churchy and beautiful and you could watch other people confessing their sins to priests in glass cubicles. We tried not to stare.

I signed us up for a tour with Fat Tire Bike Tours after reading about it on Suzy Lindau’s Wild Ride. We stopped at ten different places over a course of 6.5 miles (around 3 hrs) and we had a great time, even with the light wind and rain. 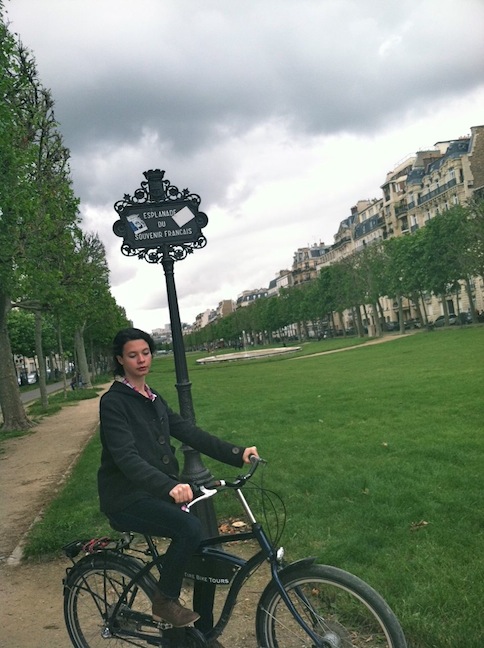 The tour was fun, but the sights weren’t always easy to find.

On the day we went to the Louvre, we had only about an hour, so I told Isabella she should choose what to see. She picked Napoleon III’s residence, which is located in the north, Richelieu Wing. 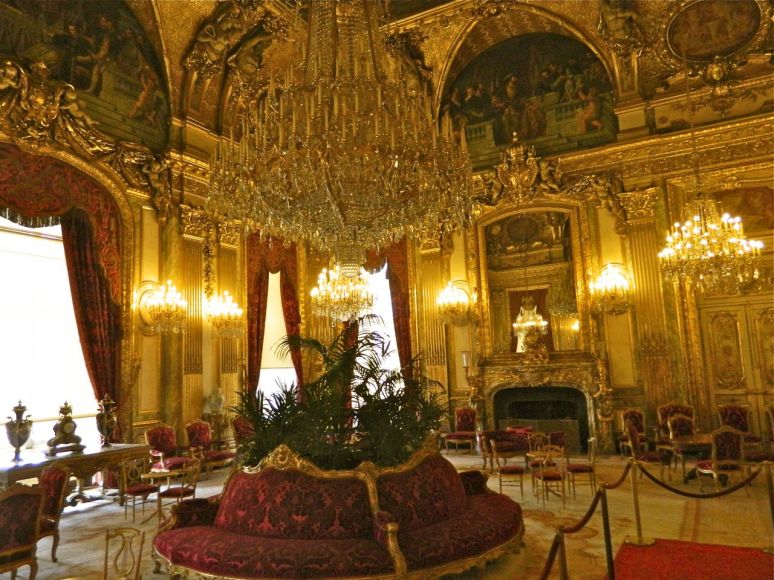 As you can see, Napoleon III preferred a clean, modern style favoring function over form, with little embellishment.

Why did Napoleon need a “Ceremonial Bed?” When people say that French “got into bed with Russia,” is this where it happened? Did they sign papers or make eyes at each other here? Did he have ceremonial sex? If anyone has any ideas on this, let me know.

Here’s something else we saw all around train stations and museums, including at the Louvre. We finally figured out what that green running man means.

Bathroom signs!! (White figure = average usage, green figure = diarrhea.) Fortunately, we never needed to follow the running man (or “runs”), not even once!

The Musee d’Orsay was also really good and much less crowded than the Louvre (open late Thurs nights, an ideal time to go). The featured exhibit through July 6 is Van Gogh / Artaud, a beautiful collection of Van Gogh paintings and drawings, many of them lesser known. Unfortunately, no pictures.

I’ll continue  with Part II of this post tomorrow with Opéra, which was spectacular, and the artsy district of Montmarte. Bonsoire soup-son `until then!

5 thoughts on “Being in Paris”