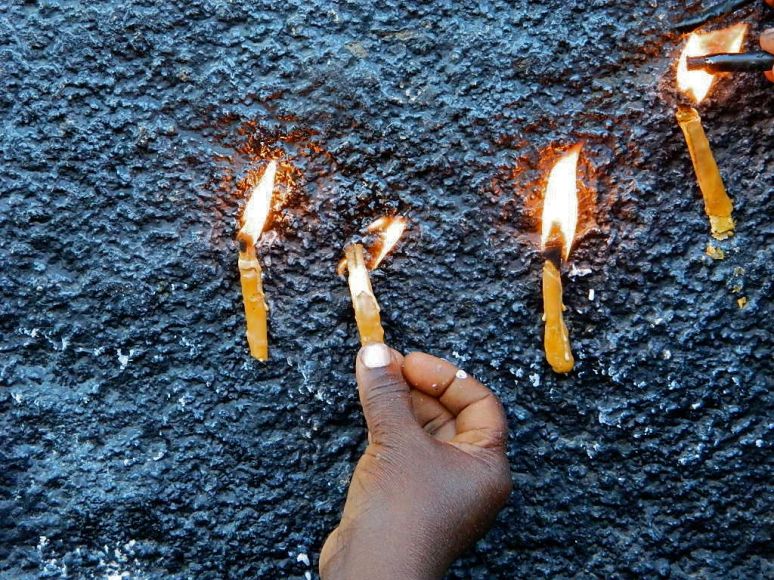 Haitian Vodou is based upon a merging of the beliefs and practices of West African peoples with Arawakian (native peoples of the West Indies) religious beliefs, and Roman Catholic Christianity. Vodou was created by African slaves who were brought to Haiti in the 16th century and still followed their traditional African beliefs, but were forced to convert to the religion of their slavers. The principal belief in Haitian Vodou is that deities called Lwa (or Loa) are subordinates to a god called Bondyé.  This supreme being does not intercede in human affairs, and it is to the Lwa that Vodou worship is directed. Other characteristics of Vodou include veneration of the dead and protection against evil.

We were interested in All Souls Day traditions in Haiti, where I expected to see celebrations similar to our Dia de los Muertos. Instead, they seemed mostly Vodou-oriented. (According to a recent travel documentary, Haiti is “80% Catholic, 20% Protestant, and 100% Vodou”.) On November 1, on our way to the Jacmel bus, we encountered a rah-rah (parade, of sorts) headed for the main cemetery in Port-au-Prince.  We decided to fall in with them to see what it was all about.

Just outside the cemetery entrance were displays of Vodou art, flowers for sale (especially marigolds), and an area set up for music. Above the large, arched stone entrance was the statement in French, “Remember You Are Only Dust.” 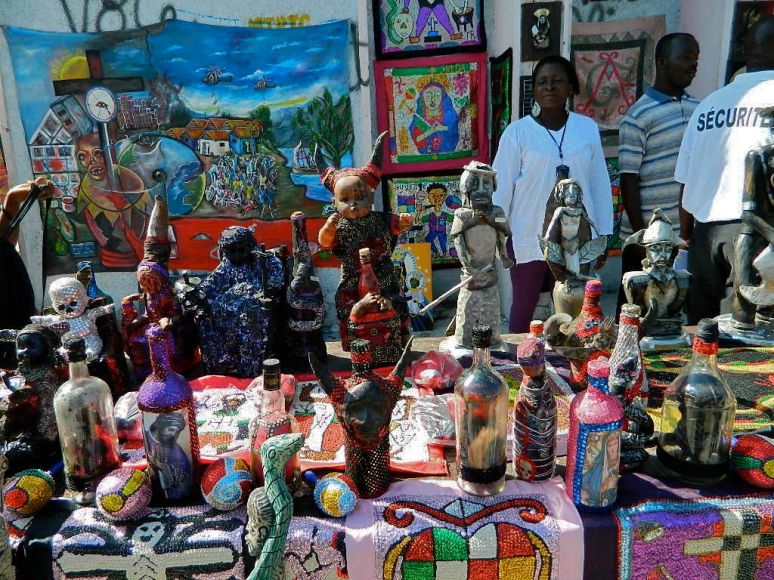 Inside the cemetery, everyone marched in sweltering heat up the main hill, past painted tombs and sellers of various things–soda, cigarettes, flowers, and trays of I-don’t-know-what. 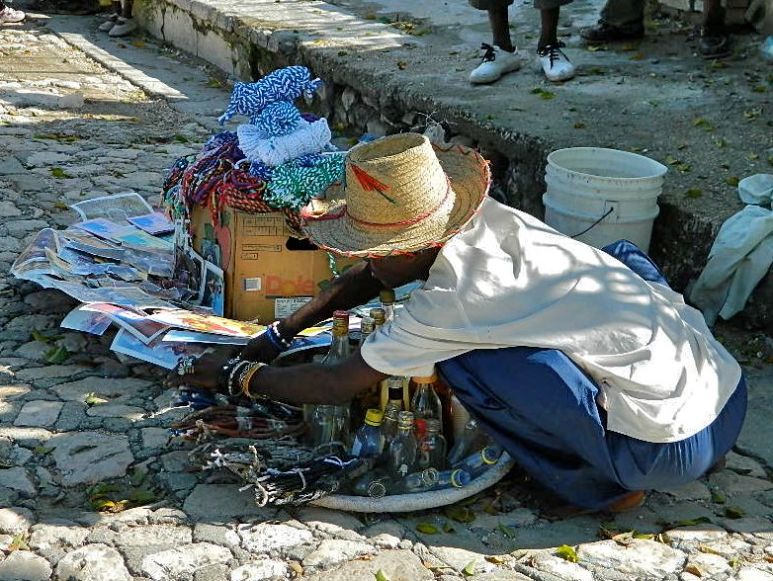 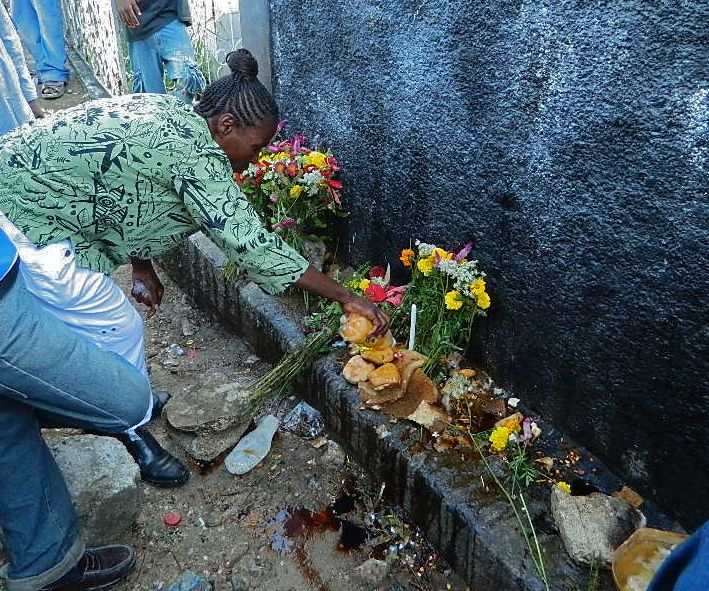 In the Haitian Vodou tradition, it is believed that spirits are all around the living and they can be communicated with, but only if living family members know where they are buried. The mass-graves created after the earthquake pose a terrible problem in this regard.

This woman was slapping a tomb (likely that of a relative) and calling out in Creole. Many of the women wore purple or white headscarves and white dresses.

Later that evening in Jacmel, Blaise took us on a detour to a Vodou ceremony in someone’s back yard as we walked home from dinner. There was a typical open-air temple with a blue post in the center, around which offerings were brought for the spirits. A traditional Vodou service includes a day or two of preparation setting up altars, ritually preparing and cooking fowl and other foods, etc. The actual ceremony begins with a series of prayers and songs in French, then a litany in Creole and African langaj that goes through all the European and African saints and lwa honored by the house, and then a series of verses for all the main spirits of the house.

An Houngan (priest) or Mambo (priestess) presides over the ceremony. The Houngans and Mambos are usually people who were chosen by the dead ancestors and received the divination from the deities while he or she was possessed. His or her tendency is to do good by helping and protecting others from spells, however they sometimes use their supernatural power to hurt or kill people.

As the songs are sung, participants believe that spirits come to visit the ceremony by taking possession of individuals and speaking and acting through them. When a ceremony is made, only the family of those possessed is benefited.

We saw women carrying candles and offerings around the temple/yard, singing and dancing, but no possessions (that we were aware of). The Houngan was welcoming to guests (us) and it’s apparently not unusual for outsiders to observe ceremonies. We were there for about 45 minutes and then headed back to the hotel.

Next up:  Aly and Paper Turtle artisans in PaP

5 thoughts on “All Souls Day (Haiti)”