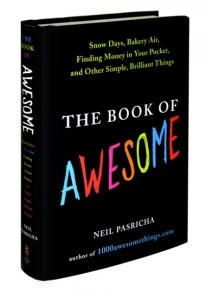 Tomorrow, one of my favorite WordPress blogs, 1000 Awesome Things, will come to an end.  In 2008, Canadian Neil Pasricha–who describes himself as an observer, not a writer–began his blog as he was dealing with the end of his marriage and the suicide of a good friend.  Every weekday since then, he has published “…a countdown of life’s little joys that reads like a snappy Jerry Seinfeld monologue by way of Maria Von Trapp.” (The Vancouver Sun).  You can read a whole page full of praise for Pasricha’s unflinchingly optimistic observations here.

Pasricha decided to bring his blog to a close with thanks and reflection at the peak of success, as the third Book of awesome  sits atop the National Bestseller list.  He will be announcing the #1 and final Awesome Thing tomorrow night at a Canadian book store. Here are a few of my favorite posts:

Anything that can grow wings

That last, crumbly triangle in a bag of potato chips

The far corners of your mind

Congratulations, Neil, and thanks for four years of Awesome!