The Demon in My Backyard 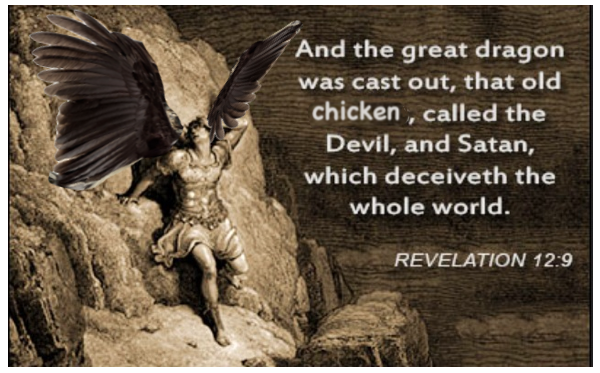 There is a dark presence in my yard, slowly eroding my sanity and longtime commitment to not engage in the eating of animal flesh. Or murder. Why is it there? I’ve asked myself this hundreds of times over the past year since I willingly opened my life and yard to it.

Yes, I invited the evil. I felt sorry for it.

As you may recall, after the untimely death of Yellow Legs Garcia, White Legs was lonely so I decided to get her a companion. And you can’t have just one chick, so I chose a second, a little black fuzzy one of indeterminate breed (against my better judgement, which told me to stick with Buff Orpingtons — friendly, affectionate, docile). Because I felt sorry for it, hanging its head through the bars of the “drawer” where they were kept at the feed store, trying to sleep. No sunlight, no ground to scratch, nowhere to run. Rescue.

Be alert and of sober mind. Your enemy the devil prowls around like a  tiny, innocent-looking chicken searching for someone to possess. 9 Resist him (her), standing firm in the faith, because you know that the family of believers throughout the world is undergoing the same kind of sufferings* (Peter 5:8-9).

*True, but most of the world is also willing to kill and eat them or at least let them live miserable lives in tiny cages.

I once read a story where the author described a character as looking around “with the uncomprehending gaze of a chicken.” Clearly, that author knew nothing about chickens. They are smart. They learn. They adapt. They will ruin you. 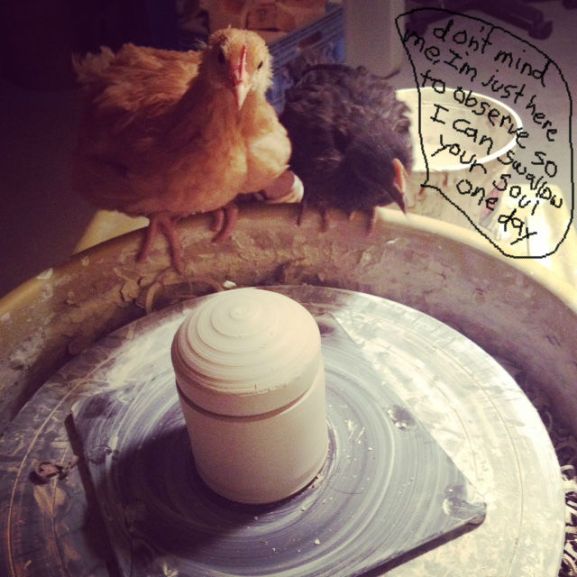 Let’s face it, anything that’s one of the closest living relatives of dinos, evolving for more than 10 million years, doesn’t stick around that long for being stupid. I suspect they commanded much more respect before the advent of modern poultry (torture) farms, where they’re treated like commodities rather than relatives of the wild SE Asian jungle fowl, formidable creatures with complex social structures, intelligence and curiosity. But I digress.

Organic food, treats, a huge run, supervised daily ranging … I take good care of my hens in their chicken utopia. Even the wild doves wish to partake.

I found this the other day. The dove would’ve had to walk into the coop and up the ramp to lay her egg there. Obviously because she knew that her offspring would enjoy a better life than she could ever give them. I am losing my mind.

And let’s not forget daily servings of their ultimate favorite treats, grapes (cut in half so they don’t choke. I’ll say that again: I cut grapes in half for these boobs). And what do I get in return? Routine escape. Mess. Huge holes dug in the yard. Poop everywhere. Dirt on my patio. And, yes, eggs (devil ovum) that I don’t even like, so I mostly give away.

Try navigating this after dark.

I used to have a nice patio. That weird fabric on the left is the only thing that keeps them out of the planter, probably for its vague resemblance to the Holy Ghost.

The demon is especially smart. 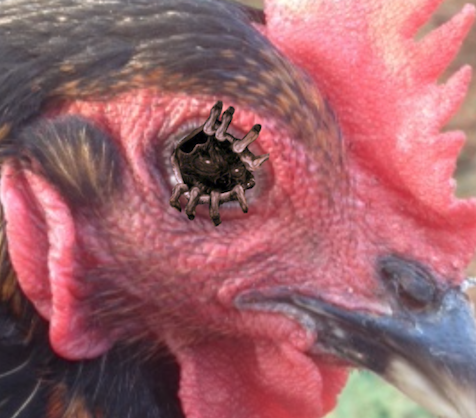 She’s smarter and more ambitious than the Orpies, who once-upon-a-time gave me little trouble. They respected things like low fences and shadecloth barriers. They were afraid of the pond and wouldn’t dream of trampling the planters. But that was then. The Orpies have watched the demon, who fears nothing and wants everything, and learned her wicked ways. They are completely ruined. 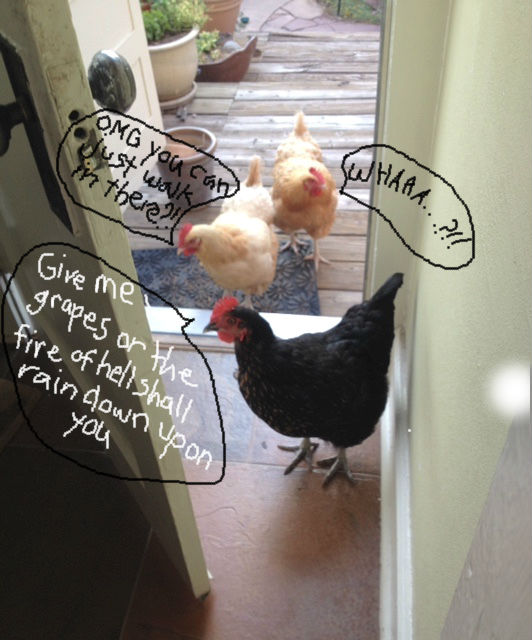 I’ve had to clip all of their wings (demon still has a 3′ vertical jump thanks to her muscular, cloven legs) but this does little to curb the escapes and destruction. The only one who never gives me any trouble is Rufina. She’s perfect. 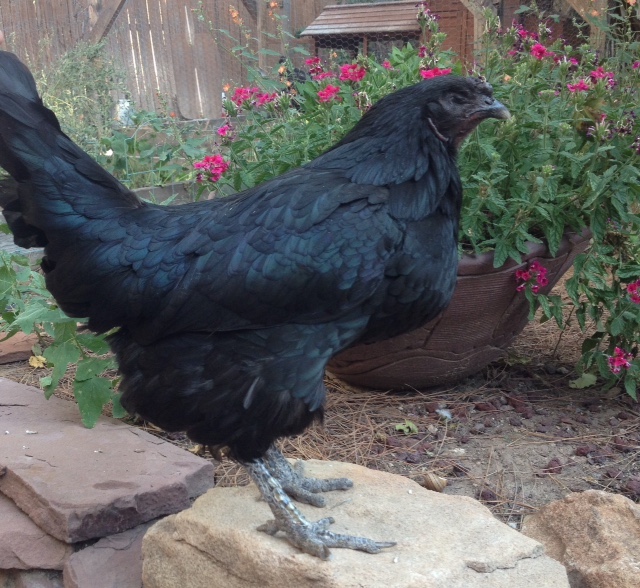 Oh, and then there’s this: I GOTS A RACCOON IN MAH HOOOOOUSE!!!

Imagine the terror I felt one night not so long ago when I discovered that the dog food crunching noise at 3 a.m. wasn’t Velma (who in her old age was passed out next to my bed). ?? Imagine the terror as visions of a lunatic, dog-food eating crackhead flashed before my eyes. !! As I lay there frozen, with nothing but a geriatric dog to protect me. !!

Only after reconsidering the likelihood of a crackhead intruder stopping to fuel up at the dog food bowl did I work up the courage to turn on the light. And this is what I found. Sitting in Velma’s water dish. In my downtown Albuquerque hallway.

I told raccoon to leave and surprisingly, it did. Back through the kitchen and out the dog door, leaving little wet footprints in its wake. I now have to barricade the dog door at night and hope raccoon (or its skunk friend, also attracted to chicken utopia) don’t acquire a taste for hens, as some of my neighbors have unfortunately experienced.

The few times I’ve forgotten to barricade the dog door, raccoon returned and our exchanges went something like this:

me: [flip light on, raccoon continues to eat, undisturbed] You must leave at once!

me: you cannot do that in my house!

me: You must leave at once!! We’ve been through this before!

raccoon: [turns to leave, reconsiders, turns back] Not leavin without mah fud

me: GET OUT!!! [assumes Charlie’s Angel’s pose]

So, this is my life.

I work. I spend too much time wrangling and cleaning up after chickens (except for Rufina, she’s perfect). I match wits with a raccoon in the middle of the night. Oh! And I almost forgot — as of about 2 years ago, I do Ashtanga yoga! Not because it’s fun or so athletic or cool blah blah blah.

No. I do it because one day, I will have an Instagram devoted exclusively to me posing in exotic locations. 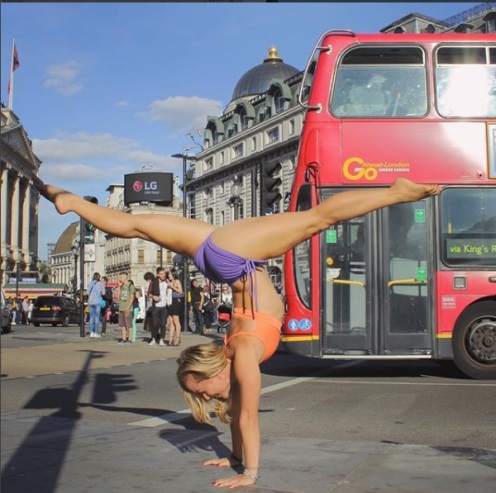 “Lookie mah toes is touchin’ that buildin’!” (image via kinoyoga on Instagram)

But my traffic-stopping poses are years away. So in the meantime, I’ll settle for exotic chicken pictures and hope for a simpler tomorrow: a good night’s sleep, a house without wild or bedeviled animals, doves that keep their anchor babies to themselves, and a few more years in the company of a loyal old dog. 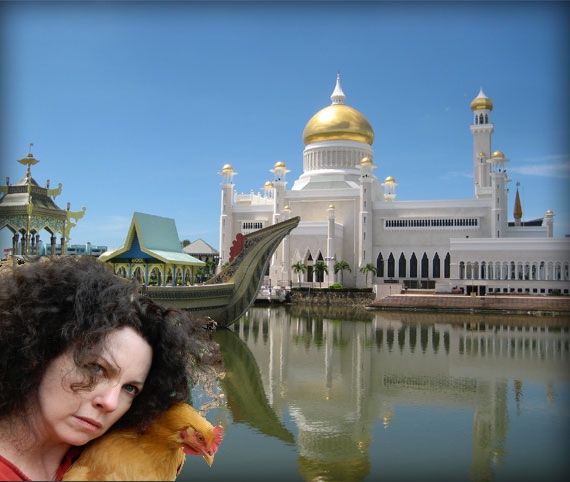 19 thoughts on “The Demon in My Backyard”